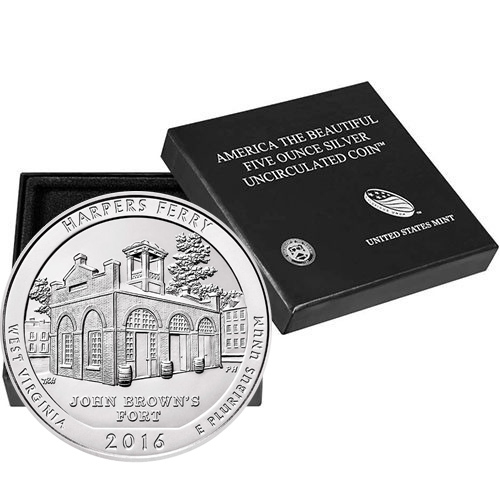 For those who buy silver from the United States Mint, the America the Beautiful Series of coins is a popular option. The 56-coin series includes designs representing historic sites, places, and people from each of the 50 states, five overseas territories, and federal district in the United States of America. Right now, 2016-P 5 oz Burnished Silver ATB Harpers Ferry Coins are available to you online at Silver.com.

Each of the 2016-P 5 oz Burnished Silver ATB Harpers Ferry Coins in this listing at Silver.com is available inside of its original box from the United States Mint. The coins also feature a Certificate of Authenticity from the US Mint. Burnished Silver ATB Coins come with a matte finish and a “P” mint mark from the Philadelphia Mint as well.

President George Washington established one of the first federal munitions armories at Harpers Ferry after a 1785 visit to the region. He believed the area to be ideal for shipping goods between the coast and towns to the west. The confluence of the Shenandoah and Potomac Rivers also provided water power for manufacturing processes at the site.

It was at Harpers Ferry that one of the first violent actions that would eventually lead to the Civil War occurred. John Brown, an abolitionist, led an invasion of the armory hoping to capture arms to give to slaves and lead an uprising against US forces to overthrow slavery. In an ironic twist, US Marines would capture Brown and quell the uprising. Those Marines were under the leadership of US Army Colonel Robert E. Lee.

On the reverse of 2016-P 5 oz Burnished Silver ATB Harpers Ferry Coins, you’ll find an image of John Brown’s Fort. The building is actually a firehouse on the Harpers Ferry site that marked the place Brown and his rebels made a last stand.

The obverse of 2016 Burnished Silver ATB Coins includes the effigy of President George Washington. The nation’s first president is depicted in left-profile relief in the same design that has featured on the US quarter since 1932.

If you have any questions about these coins, please feel free to reach out to Silver.com. Our customer service team is available to you at 888-989-7223, online using our live chat, and via our email address.