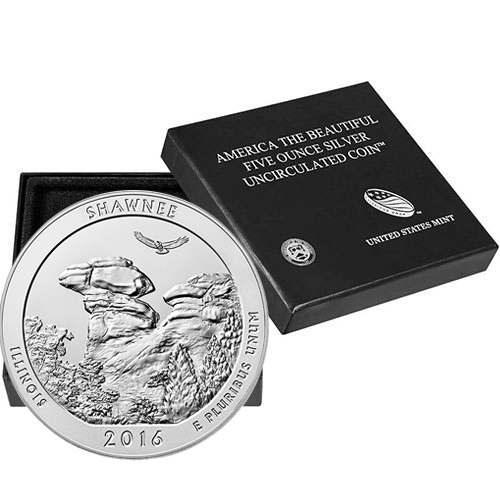 The Shawnee National Forest in Illinois was chosen as the site to represent the state in the America the Beautiful Series from the United States Mint. Established in 1933 during the administration of President Franklin Roosevelt, Shawnee National Forest encompasses the northernmost sections of the Ozarks in southern Illinois and the Shawnee Hills. The 2016-P 5 oz Burnished Silver ATB Shawnee Coins are currently available to you for purchase online at Silver.com.

Most of the land within Shawnee National Forest is part of a region known as the Shawnee Hills. Here you’ll find ancient rock layers that actual pierce the surface of the Earth and are visible to the naked eye, unlike the rest of Illinois’ older rock formations which remain buried underground. The Shawnee Hills have surface expressions of limestone and sandstone that are extremely durable and weather-resistant.

Shawnee National Forest encompasses all of the Shawnee Hills plus other publicly-owned lands in southern Illinois. Many of the first plots of land purchased in the 1930s to establish the park were exhausted farmlands that were replanted with pine trees to aid in soil retention and to help regrow the region’s natural vegetation.

On the reverse of 2016-P 5 oz Burnished Silver ATB Shawnee Coins is the image of one of the many famous rock formations found within the park today. Camel Rock, as it is known, bears a resemblance to a camel lying down. There is a formation to the left that looks like the head while a second formation to the right mimics the hump of a camel.

The obverse of 2016 Burnished Silver ATB Shawnee Coins features the left-profile portrait of George Washington. This design was created in 1932 for the circulation quarter by John Flanagan. Flanagan used a 1786 bust of Washington as inspiration for the portrait.

These 2016-P 5 oz Burnished Silver ATB Shawnee Coins are available to you inside of their original US Mint boxes and come with a Certificate of Authenticity. All Burnished Silver ATB Coins also feature a “P” mint mark from the Philadelphia Mint with a matte finish as opposed to the shinier visual on silver bullion versions of the coin.

We encourage Silver.com customers to contact us with questions at 888-989-7223. You can also connect with us online using our live chat and email address options.