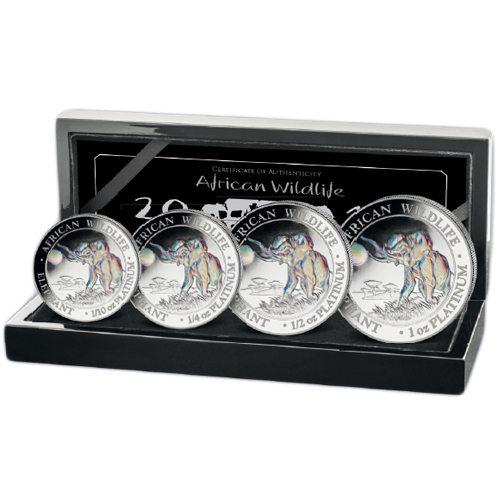 African Elephant coins were released as part of a wider campaign to raise awareness about the plight of the elephants on the continent. The African elephant, consisting of two subspecies, is the largest land mammal in the world and is often killed by poachers for its valuable ivory tusks.

The African Wildlife Series was introduced in 1999 as a coin issued for Zambia, but in 2004 the Bavarian State Mint changed the issue to Somalia. Since then the coin’s popularity has taken off immensely. 2016 marked the latest expansion in the series, with the first-ever release of the Platinum Somalian Elephant.

In this offering you can purchase a 2016 Platinum Somalian Elephant Hologram Proof Coin Set. This set includes four coins in total: a 1/10 oz, 1/4 oz, 1/2 oz, and 1 oz coin. Each has a distinct hologram effect on the elephant design on the obverse.

The obverse of the Platinum Somalian Elephant coin features the 2016 elephant design, which features a large bull elephant in the foreground at the edge of a river. The waters of the river drift off into the background toward the rising sun.

On the reverse of all 2016 Platinum Somalian Elephant Hologram Proof Coins in this set is the image of the coat of arms for Somalia. Included on this side are engravings that identify the nation of issue, year of issue, and face value of the coin in Somali shillings.

The Bavarian State Mint is located in Munich, and was founded in 1158. The mint is now one of the most important in Germany’s minting system, and is owned by the Free State of Bavaria’s government.

Please direct your questions to a Silver.com associate on the phone at 888-989-7223. You can also connect with our customer service associates on the web using our live chat and email features. If you are interested in similar products, be sure to check out our full selection of Platinum Coins.