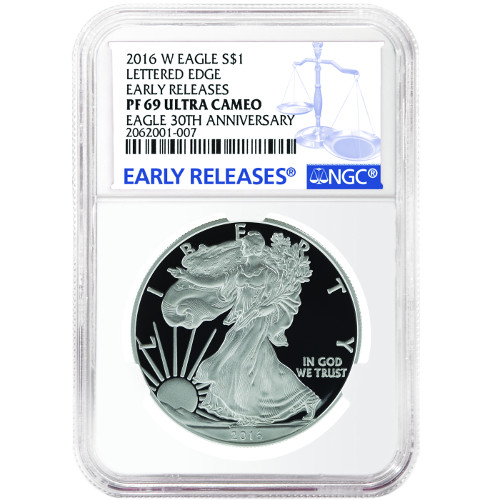 Among the precious metal coins available in today’s market, proof coins are the preferred product for collectors because they have a more visually stunning finish than their bullion counterparts. With the addition of certification to verify the condition of a coin, collectible coins enjoy even higher value. Today, the 2016 Proof Silver American Eagle Coin is available in near-perfect condition on Silver.com.

2016 marks the 30th anniversary of the Silver American Eagle coin series, and the United States Mint is celebrating by make a change to its Proof Silver American Eagle for the first time ever. The obverse and reverse faces remain the same, but unique edge lettering is being used for the first time with text denoting the 30th Anniversary celebration.

Each 2016 Proof Silver American Eagle coin available to you today is a near-perfect PF69 coin from the NGC. Coins with this grade have full, original mint luster, but also feature a maximum of two minor detracting flaws. These are often limited to miniscule hairlines or contact marks, and always located outside the primary focal area.

As an Early Release coin, these products arrived at the NGC or an approved third-party depository for certification within the first 30 days of the release date for 2016 Proof Silver American Eagle coins as set by the US Mint.

Please direct your questions regarding these coins to Silver.com. Our associates are available at 888-989-7223, online using our live chat, or via our email address.