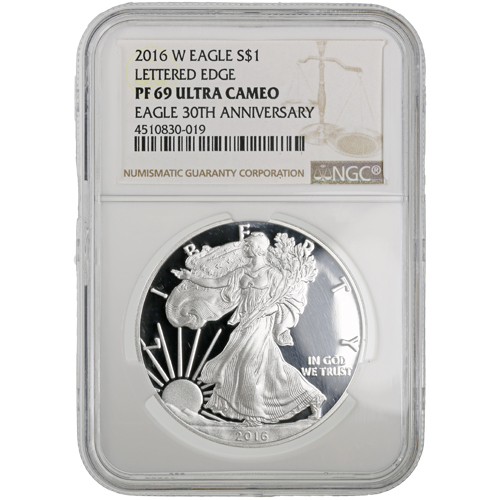 There are few coins as popular with investors and collectors around the world as the Silver American Eagle. Bearing iconic American images of Liberty and the bald eagle, these coins are backed for their metal content and weight by the federal government of the United States. The 2016-W 1 oz Proof Silver American Eagle Coin is available to you today online at Silver.com with NGC certification!

Each 2016 Proof Silver American Eagle coin available to you today is a near-perfect PF69 coin from the NGC. Coins with this grade have full, original mint luster, but also feature a maximum of two minor detracting flaws. These are often limited to minuscule hairlines or contact marks, and always located outside the primary focal area.

Ultra-cameo coins such as these Silver Eagles feature a deeply-mirrored, clear background field that is brilliantly contrasted by the strong, frosted finish on the design set that gives it the appearance of floating above the coin’s surface.

We encourage Silver.com customers to contact us at 888-989-7223 with questions. You can also reach us online using our live chat and email features.