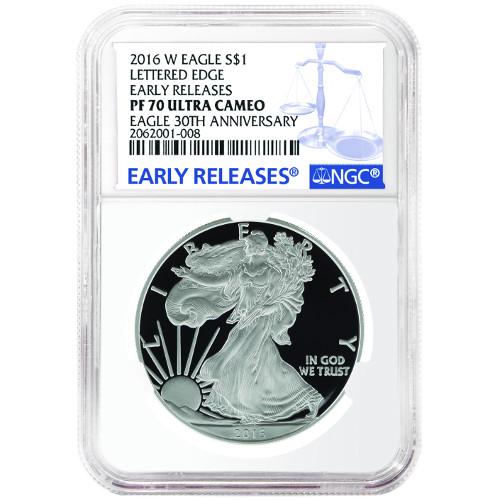 All 2016 Proof Silver American Eagle coins offered in this product listing have a perfect grade from the NGC. Coins in PF70 condition exhibit full, original mint luster and bear no detracting flaws of any kind on the surface areas.

The Early Release designation is for coins that meet strict guidelines for delivery and grading. These coins arrived at the NGC or an approved third-party depository within 30 days of the US Mint’s scheduled release date for 2016 Proof Silver American Eagle coins.

Proof Silver American Eagle coins are produced by the United States Mint at its West Point Mint facility. While bullion coins are struck there and on a supplemental basis at the San Francisco Mint, proof coins are only produced at West Point and feature a “W” mint mark.

If you have any questions, Silver.com customer service associates are available to help. You can contact us on the phone at 888-989-7223, connect with us online using our live web chat, or simply send us an email.