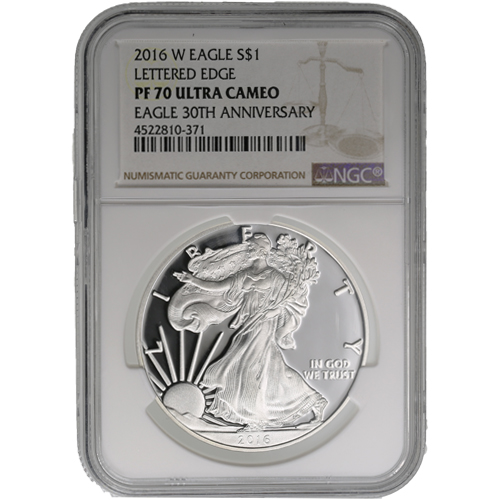 Few coins have the popularity and level of demand that the Silver Eagle enjoys. Whether it is the bullion version selling upwards of 40 million coins annually, or the Proof Silver Eagle enjoying robust production levels, these coins are constantly in demand. Right now the celebratory 30th anniversary coin is available in the form of the 2016-W 1 oz Proof Silver American Eagle, yours to purchase online at Silver.com.

All 2016 Proof Silver American Eagle coins offered in this product listing have a perfect grade from the NGC. Coins in PF70 condition exhibit full, original mint luster and bear no detracting flaws of any kind on the surface areas.

Coins with a UCAM, or Ultra-cameo, designation have a brilliant visual appearance. The strong, frosted matte finish of the design set is perfectly contrasted by the deeply-mirrored, clear background field that creates the illusion of the design floating off the coin’s surface.

2016 marks the 30th anniversary of the Silver American Eagle coin series, and the United States Mint is celebrating by making a change to its Proof Silver American Eagle for the first time ever. The obverse and reverse faces remain the same, but unique edge lettering is being used for the first time with text denoting the 30th Anniversary celebration.

If you have any questions, don’t hesitate to ask. Silver.com associates are available at 888-989-7223, online using our live chat, and via our email address. The current price of silver is also available on our website anytime.