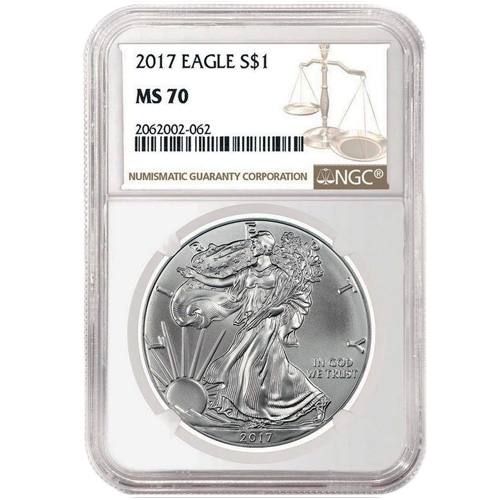 2016 marks the 30th anniversary of the Silver Eagles 1986 release. The coin debuted that year in bullion and proof versions, and has since added a third version. The burnished Silver Eagle debuted in 2006 on the program’s 20th anniversary.

The Silver American Eagle itself is not the only the reason for celebration with this year’s release, as its obverse design of Walking Liberty celebrates 100 years since its debut on the nation’s half-dollar coin.

On the obverse of each 2016 Silver American Eagle coin is the image of Walking Liberty, which depicts Lady Liberty wearing the American flag over her shoulders as she walks toward the setting sun as a sign of the nation’s march toward a brighter tomorrow.

The reverse side of all Silver American Eagle coins bears the image of the heraldic eagle design. Originally created in 1794, this particular version is a refinement completed in 1986 by former Chief Engraver of the United States Mint, John Mercanti.

All 2016 Silver American Eagle coins listed here are Mint State 70 specimens as graded by the NGC. Coins in this condition exhibit full, original mint luster and bear no detracting flaws of any kind.

The United States Mint has produced Silver American Eagle bullion coins at three of its four mint facilities since 1986. Today, the vast majority are struck by the West Point Mint, with supplemental assistance to meet intense demand since 2011 at the San Francisco Mint.

If you have any questions, please don’t hesitate to ask. You can reach out to Silver.com on the phone at 888-989-7223, connect with us online through our live chat, or simply send us an email.