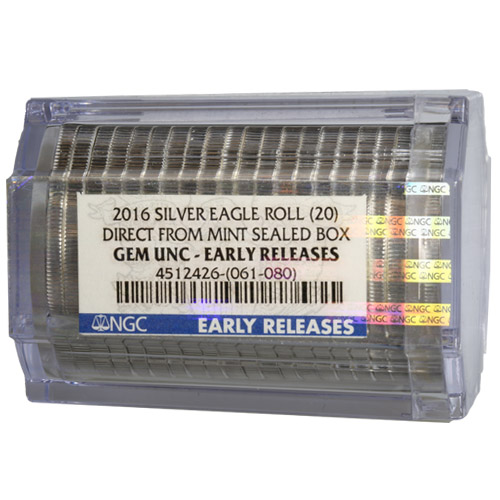 The Silver Eagle bullion coins feature a historic US coin design. Walking Liberty is featured on the obverse and was created in 1916 by Adolph A. Weinman. Mr. Weinman was a noted artist and sculptor in the early 20th century who submitted two designs to a US Mint and Treasury Department contest in 1916 to replace the designs of the Barber Coinage on dimes, quarters, and half dollars. Weinman’s designs won for the dime with Winged Liberty and the half dollar with Walking Liberty.

All of the 2016 Silver American Eagle Gem Rolls in this product listing include a total of 20 individual 2016 Silver Eagles. There is a total of 20 Troy oz of .999 fine silver in this listing with a full face value of $20 (USD). These coins were verified in Brilliant Uncirculated condition by the NGC and housed inside of the NGC’s distinctive Gem Roll. Each one of these coins was also verified Early Release by the NGC, indicating that the coins all arrived with the NGC within 30 days of the 2016 release date of Silver Eagles from the US Mint.

On the obverse of 2016 Silver Eagles is Walking Liberty. This iconic image features Liberty in left-profile relief as she walks toward the sun on the horizon. She has the American flag draped over her shoulders, her right hand outstretched to the sun, and branches of oak and laurel in her left hand.

The reverse of 2016 Silver American Eagles includes the heraldic eagle of the United States. This image was used on the very first US coins ever struck and released by the United States Mint. This is the modern depiction of the seal and it was modernized by John Mercanti for use on the Silver Eagle in 1986.

Please don’t hesitate to reach out to Silver.com customer service if you have any questions. You can call us at 888-989-7223, chat with us live online, or email us directly.