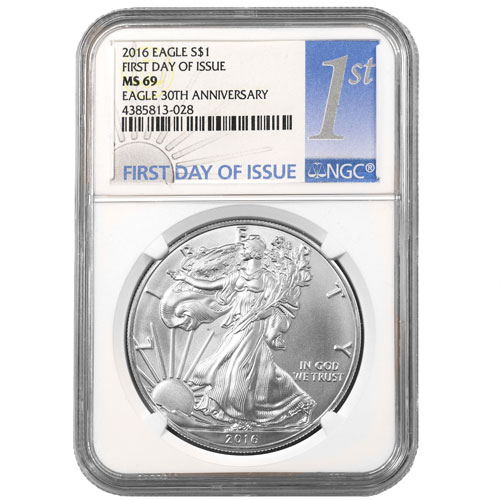 2016 marks the 30th anniversary of the Silver American Eagle coin series from the United States Mint. In celebration, the United States Mint has special plans for the proof and burnished versions of the coin, and the NGC is marking the occasion with a 30th anniversary label. Today, the 2016 Silver American Eagle coin is available on Silver.com with a near-perfect grade and celebratory label.

Two years ago, the Silver American Eagle broke a record with 44.3 million coins sold, and surpassed that in 2015 with a mintage of 47.2 million coins in total. These sales totals were powered mostly by the popularity of the bullion coins, but also included mintage and sales figures for the proof and burnished versions.

Each 2016 Silver American Eagle in this product listing is a near-perfect coin according to the NGC. Coins with an MS69 grade still have their full, original mint luster, but also feature a maximum of two minor detracting flaws.

In honor of the coin’s 30th anniversary, the NGC issued 30th Anniversary labels inside the plastic slab the coins ship in. These are also First Day coins, indicating they were delivered to the NGC within 24 hours of the release date set by the US Mint.

Please direct any questions you have to a Silver.com associate by calling us at 888-989-7223, connecting with us online via our live chat, or sending us an email.