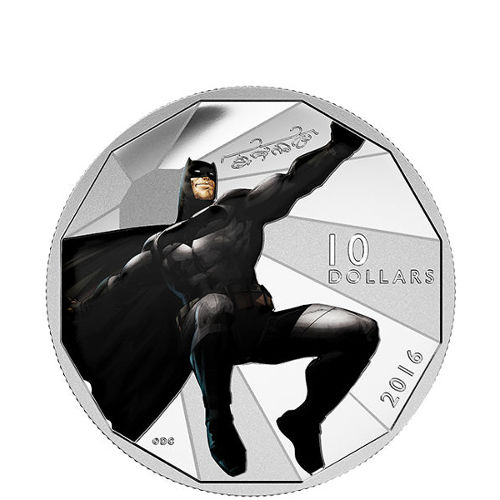 The Royal Canadian Mint’s Batman v. Superman: Dawn of Justice coin programs rolls on in the spring of 2016, with the release of the third coin in the series. Batman, also known as the Dark Knight, is the hero of Gotham City, acting as a vigilante who assists the police in maintaining law in order in a sinful city. Today, the 2016 ½ oz $10 Silver Canadian Batman v. Superman: Dawn of Justice Batman coin is available for purchase on Silver.com.

Batman made his first appearance in Detective Comics #27 in May 1939. Since that time, he has regularly appeared in his own comics and spawned countless animated series on television, feature films, and video games.

In the latest installment, the Dark Knight faces his fiercest rival in the form of fellow DC Comics superhero Superman, an individual he believes enjoys too much power and poses a threat as a result. The battle between the two distracts the superheroes from an even more dangerous threat on the horizon.

The Dawn of Justice: Batman v. Superman silver proof coin series from the Royal Canadian Mint features four individual ½ troy oz coins with designs honoring the series and each of its superheroes. The first release featured the series logo, with subsequent releases includes the Superman coin and now this Batman coin. One more design is yet to be released, honoring Wonder Woman.

On the reverse side of the coin you’ll find the colorized image of the Caped Crusader, along with engravings of “2016” and “10 Dollars,” as well as the Kryptonian syllabic writing system’s version of “Batman.” Meanwhile, the obverse includes the right-profile portrait of Queen Elizabeth II as created by Susanna Blunt in 2003.

If you have any questions, please don’t hesitate to contact Silver.com. Our associates are available at 888-989-7223, online using our live web chat, and via our email address. Check out more of our Silver Royal Canadian Mint Coins.