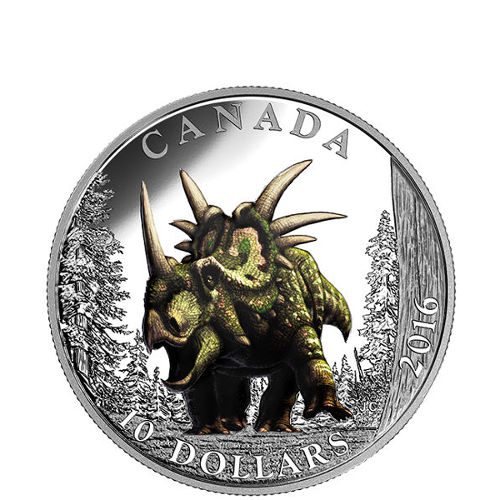 The Day of the Dinosaurs may have come and gone on planet Earth, but the Royal Canadian Mint is just getting started with its Day of the Dinosaurs celebration. The second coin in this popular colorized silver series has arrived, and it commemorates a creature who once roamed present-day Alberta during the Late Cretaceous period. Today, the 2016 Silver Canadian Day of the Dinosaurs Spiked Lizard coin is available for purchase on Silver.com.

The Spiked Lizard coins in this product listing from Silver.com represent the second release in a planned 3-coin series from the Royal Canadian Mint. The Day of the Dinosaurs series features ½ oz. fine silver coins with a face value of $10 (CAD) and a purity of .9999. The first release in the series was Terror of the Sky, and featured the image of the Quetzalcoatlus, a winged beast of the prehistoric world.

Each coin in the series has an extremely limited mintage of just 10,000 coins in total. The Royal Tyrrell Museum of Palaeontology has verified the designs from Csotonyi on the reverse of each coin for authenticity and accuracy in appearance.

On the reverse is an image of the so-called Spiked Lizard, which is colorized to bring the massive beast to life. The background imagery reflects how present-day Alberta looked during the Late Cretaceous period when it was a sub-tropical environment.

The obverse features the familiar right-profile portrait of Queen Elizabeth II, monarch of the United Kingdom and commonwealth nations since 1952. Engravings on this face include only Her Majesty’s name and the phrase “D.G. Regina.”

Royal Canadian Mint coins are produced at either the Winnipeg or Ottawa facilities. The former was opened in the 1980s in response to massive increases in demand for RCM coins and faltering capacity at the original Ottawa facility.

If you have any questions, Silver.com associates are ready to help. You can reach us on the phone at 888-989-7223, online using our live chat, or via email address.