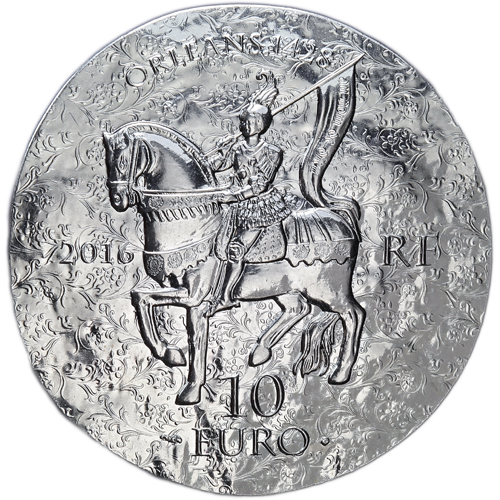 The official mint of France continues its celebration of the Women of France with the release of a 2016 Silver French Joan of Arc Coin. The overall series is designed to highlight the historic contributions to the foundations of France from significant women in the nation’s history. Although she appears third in the series, it’s hard to argue the impact Joan of Arc had on France. Right now, the 2016 Silver French Joan of Arc Coin is available in BU condition on Silver.com.

Joan of Arc is known as the Maid of Orleans. At a very young age she is said to have experienced a vision from God that led her to help the French Army defeat the English and their French allies during the Hundred Years War.

She helped lead the French to victory, a win that freed France from English control and established Charles on the throne of France. In 1431 at the age of just 19, she was captured by the British and burned alive at the stake for witchcraft and heresy. She remains a symbol of French unity and nationalism today, and was canonized as a saint by the Roman Catholic Church in 1920.

Each of these 2016 Silver French Joan of Arc Coins is available in Proof condition.

On the obverse of each Joan of Arc coin is the image of Joan, captured in left-profile relief and surrounded by engravings of “Jeanne d’Arc” and “1412-1431,” her years of birth and death. The background of both sides includes numerous small fleur de lis symbols.

The reverse of the 2016 Silver French Joan of Arc Coin bears the image of Joan of Arc in full battle armor astride her horse. The depiction reflects her appearance at the Battle of Orleans, her greatest military achievement and the most significant in French history during the Hundred Years War.

If you have any questions about the Joan of Arc Coin, please don’t hesitate to ask. Silver.com is available at 888-989-7223, online using our live web chat, and via our email address.