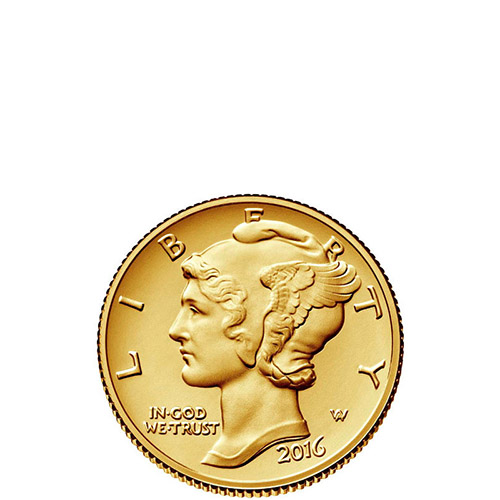 The obverse of each 2016 Gold American Mercury Dime features Adolph A. Weinman’s Winged Liberty design. It is a left-facing profile of Liberty, with her hair tucked up into the Phrygian cap upon her head. It also includes Weinman’s initials – the A tucked under the W – behind Liberty’s neck, below and to the left of the Y in Liberty.

The reverse of each 2016 Gold American Mercury Dime features a Roman Fasces wrapped up by a branch of olive leaves. This too is an Adolph A. Weinman design. These two images combine to represent America’s military might and readiness as well as her resolve for peace. Included on the reverse is a description of the coin’s composition and weight, and a W mint mark for the West Point Mint.

This Gold American Mercury Dime became known as the Mercury Dime rather than the Winged Liberty Dime due to Liberty’s resemblance to the Roman god Mercury.

Should you have any questions, the Silver.com Customer Service team is standing by, ready to assist you. We can be reached via phone at 888-989-7223, via our online live chat, or via our email address.