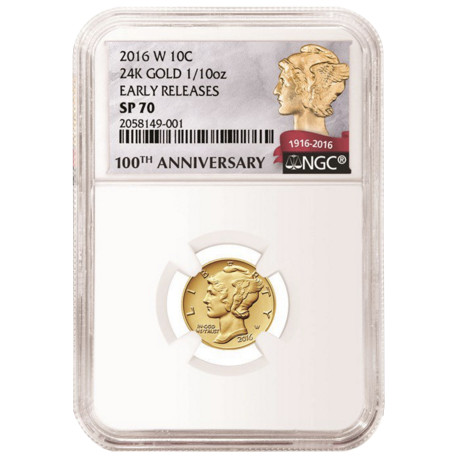 The United States Mint has released its celebratory Gold Centennial Coins to mark 100 years since the release of three iconic American coin designs. Each coin features 24-karat gold, and has a weight representative of the original coin’s face value. Right now, the 2016 1/10 oz Gold American Mercury Dime Coin is available from Silver.com as a perfect specimen.

More and more often investors are buying gold in fractionals to meet their needs because of their divisibility. Spot price of gold changes frequently, but can always found using our on-site charts.

The 2016 1/10 oz Gold American Mercury Dime coins available here ship from the Numismatic Guaranty Corporation with special 100th anniversary labels contained within the plastis slab. In addition, these coins have been designated as Early Release products. This indicates each was received for grading by the NGC within the first 30 days of the release date as set by the US Mint.

Adolph A. Weinman created the Winged Liberty depiction in 1916 that features Liberty in left-profile relief wearing the Phrygian cap. As a result of his design choice, many 20th century Americans confused the image as that of the Roman god Mercury. This explains the common usage of the title Mercury Dime for the original coins.

Each 2016 1/10 oz Gold American Mercury Dime coin here is a perfect SP70 coin according to the NGC. This indicates coins with a proof-like finish, its full, original luster from the mint, and no detracting flaws of any kind on its surfaces.

The obverse of each coin features the Winged Liberty design, along with engravings of “Liberty” and the year of issue. An addition to the design is the use of Weinman’s initials as “AW.”

On the reverse is the original Roman fasces design from Weinman. The fasces is a symbol of military might and resolve, while the olive branch it is wrapped in represents peace. Weinman’s design is representative overall of America’s military power and readiness, but desire for a peaceful existence.

If you have questions, please contact Silver.com. Our associates are available on the phone at 888-989-7223, online using our live web chat, and via our email address.