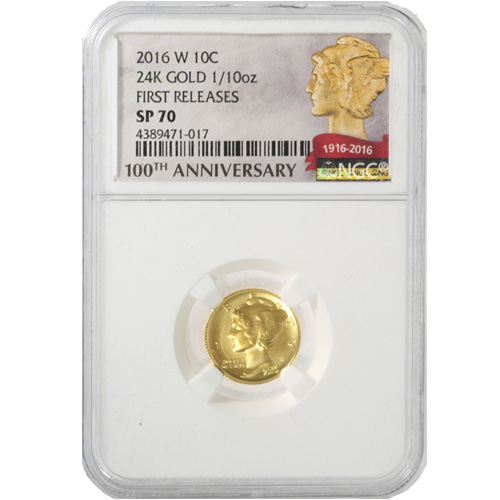 Any quantity available for $130.00 per coin over spot!

Adolph A. Weinman submitted two impressive designs of Liberty to the United States Mint in 2016 for consideration on denominations the mint was redesigning that year. His designs were eventually chosen for the US Dime and the US Half Dollar. His design for the US Dime was officially known as Winged Liberty, but has gone down in history as the Mercury Dime. Now, 2016-W 1/10 oz Gold American Mercury Dime Coins are available to you in perfect condition to purchase online at Silver.com.

Weinman’s design of Liberty for the US Dime depicts her figure wearing a winged cap. Though the coin was officially designated the Winged Liberty Dime, its eerie similarity to depictions of the Roman messenger god Mercury resulted in Americans commonly referring to the coin as the Mercury Dime instead.

The coin design from Weinman replaced the Barber Coinage dime with a bust of Liberty on its obverse. The coin would remain in production from 1916 to 1945. It was replaced starting in 1946 with a bust of President Franklin D. Roosevelt following his death in office during his fourth term as President of the United States. The Roosevelt design is still in use today on circulating dimes.

On the obverse side of 2016-W 1/10 oz Gold American Mercury Dimes is the image of Liberty in left-profile relief. This face of the coin includes inscriptions of “Liberty,” the national motto, the date mark, and the “AW” initials of the designer.

There reverse face on the 2016-W 1/10 oz Gold American Mercury Dimes features the same design from the Mercury Dime that Weinman created back in 1916. The Roman fasces is depicted in the center of the design element with an olive branch wrapped around it. Inscriptions denote the nation of issue, face value, weight, purity, metal content, and the mint mark of “W.”

These 2016-W 1/10 oz Gold American Mercury Dime Coins are available to you in perfect condition with an SP70 certification. Coins in this condition showcase full, original mint luster, impressive visuals, and have no detracting flaws of any kind present. The FR designation stands for First Release and denotes that each coin arrived for grading within 30 days of the 2016 release date from the US Mint.

We encourage Silver.com customers to call us with questions about these gold coins for sale at 888-989-7223. You can also reach out to us on the web using our live chat and email address features.