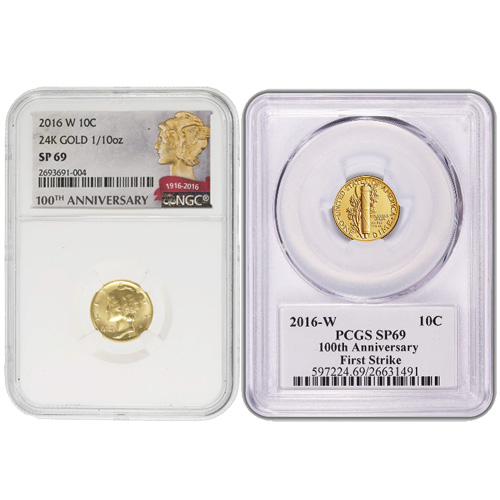 The release of the 2016 Gold American Mercury Dime was one of three 24-karat gold coins released in a commemorative collection that year. The three-coin series of gold bullion commemorative coins marked the centennial of the 1916 redesigns of the US dime, quarter, and half dollar. Two of these three designs came from popular artist and sculptor Adolph A. Weinman. Now, 2016-W 1/10 oz Gold American Mercury Dimes in near-perfect condition are available to you for purchase online at Silver.com.

The gold coins for sale in the Gold American Centennial Series in 2016 celebrated the 100th anniversary of three coin designs issued on American coins back in 1916. As the United States redesigned its circulation silver and gold coins, as well as the penny and nickel, in the early 1900s, the Barber Coinage redesign was a particularly popular one. 6th Chief Engraver of the US Mint, Charles E. Barber, had designed the images on the dime, quarter, and half dollar in 1892 and those images were still in place in 1916.

That year, Adolph A. Weinman and Hermon Atkins MacNeil had their designs chosen for the dime, half dollar, and quarter, respectively. Weinman’s designs on the dime and half dollar were particularly popular and are still in use at the US Mint today on modern bullion coins. His half-dollar design has graced the Silver Eagle since 1986 and his dime design now features on the Palladium Eagle as of 2017.

The obverse of these 2016-W 1/10 oz Gold American Mercury Dimes comes with a depiction of Liberty in left-profile relief. In this design, Liberty wears a winged Phrygian cap that reminded Americans of the Roman messenger god Mercury. The resemblance was so evident that most Americans began to refer to the Winged Liberty Dime as the Mercury Dime, a colloquially popular name that stuck over the decades.

On the reverse of 2016-W Gold American Mercury Dime is a depiction of a Roman fasces. In Weinman’s design, the fasces is wrapped in an olive branch. These images appeared together on the US dime from 1916 to 1945.

These 2016-W 1/10 oz Gold American Mercury Dimes have been graded SP69 by the PCGS or NGC. Coins in this condition showcase full, original mint luster with a maximum of two minor detracting flaws. Acceptable flaws at this grade must be located outside of the primary focal points of the coin and are limited to only minuscule contact marks or hairlines. Please be aware that other labels are possible, but not guaranteed within the slab of the coin you receive. All items are picked at random after your payment clears, meaning any additional labels could match or vary.