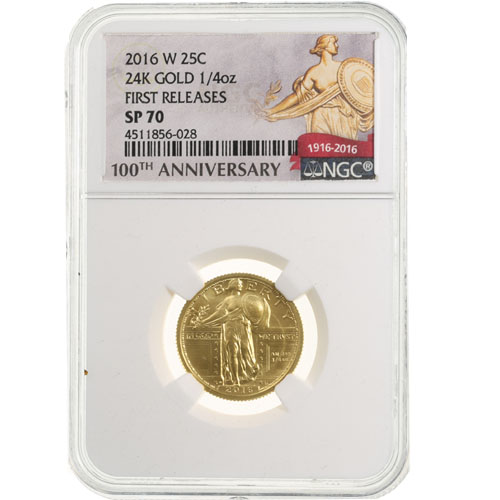 In 1916, the United States Mint and Treasury Department held an art contest to seek out designs to replace the Barber Coinage. The designs on the US dime, quarter, and half dollar had not changed since 1892 when US Mint Chief Engraver Charles E. Barber designed the bust of Liberty used across these denominations. The design selected to replace Barber’s quarter imagery was Hermon Atkins MacNeil’s Standing Liberty. Today, 2016-W 1/4 oz Gold American Standing Liberty Quarter Coins in perfect condition are available to you online at Silver.com.

The US Mint rolled out all of the designs selected in 1916 to replace the Barber Coinage again in 2016. The 2016 coins recreated each of the images on 24-karat gold coins that had varying weights based on the original denominations the images appeared on. As the Standing Liberty design featured on the US quarter, the US Mint placed it on a 1/4 oz gold coin with 24-karat purity.

All of the 2016-W 1/4 oz Gold American Standing Liberty Quarter Coins in this listing have SP70 certifications. Known as Specimen Proof 70, these coins have full, original mint luster with no detracting flaws of any kind present on the design elements or fields of the coin. Included with each coin is an Early Release label. ER labels mean the coins were received for grading within the first 30 days following release from the US Mint in 2016.

On the obverse field of the 2016-W 1/4 oz Gold American Standing Liberty Quarter is a depiction of Hermon Atkins MacNeil’s Standing Liberty. She stands guard in the gap between a wall. Influenced by the raging war in Europe that America was trying to avoid, MacNeil created this design with Liberty looking east toward the conflict with the US national shield in her hand to defend against trouble. In her right hand, she holds an olive branch symbolic of a desire for peace.

The reverse side of 2016-W 1/4 oz Gold American Standing Liberty Quarters is an American bald eagle in flight. Both this design and the obverse image were created by MacNeil in 1916 and used on the quarter until 1930.

Please feel free to contact Silver.com with any questions. Our customer service team is available to you at 888-989-7223, online using our live chat, and via our email address.