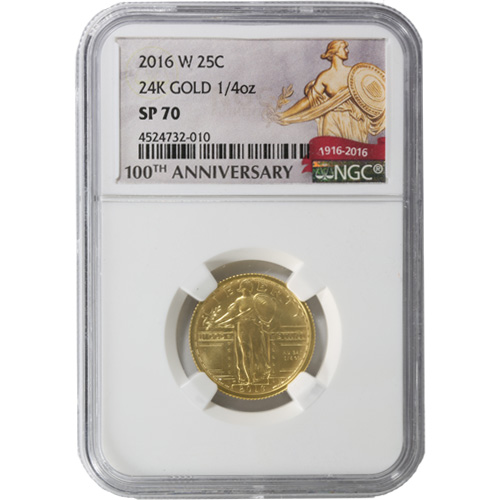 The United States Mint is very select in its release of 24-karat gold coins. The mint had never issued such pure gold coins for sale in its long history until 2006 when it introduced the Gold American Buffalo bullion series. Since then, a select few commemorative issues have featured 24-karat gold content. Among those select coins are those in the Gold American Centennial Series from 2016. Today, 2016-W 1/4 oz Gold American Standing Liberty Quarters are available to you in perfect condition online at Silver.com.

The United States Mint celebrated the 100th anniversary of three of its most iconic designs in 2016 with the re-release of those images on 24-karat gold coins. All three designs were introduced in 1916 by the US Mint to replace the Barber Coinage designs of Liberty and the eagle on the Dime, Quarter, and Half Dollar. This meant the reintroduction of the Mercury Dime, Standing Liberty Quarter, and Walking Liberty Half Dollar designs on gold coins.

All of the 2016-W 1/4 oz Gold American Standing Liberty Quarters available through this listing come with perfect certifications of Specimen 70 from the NGC. Coins in SP70 condition have full, original mint luster and present with no detracting flaws of any kind visible on the design elements or fields of the coin.

On the obverse side of the 2016 Gold American Standing Liberty Quarters is the historic Standing Liberty design. Created by Hermon Atkins MacNeil in 1916, the design reflected the neutrality and isolation of the United States amidst World War I in Europe. Liberty is shown in a gap between two walls. She is shown looking to the heraldic east and the conflict in Europe with a shield in her left hand to symbolize America’s readiness to defend itself if need be. Her right-hand rests on the opposing wall with an olive branch in her fingers.

The reverse face of 2016-W Gold American Standing Liberty Quarters comes with MacNeil’s original design from the quarter. It showcases the American bald eagle soaring through the air with its wings flexed as it glides.

Please don’t hesitate to reach out to Silver.com with any questions. Our team is available at 888-989-7223, online using our live chat, and via our email address.