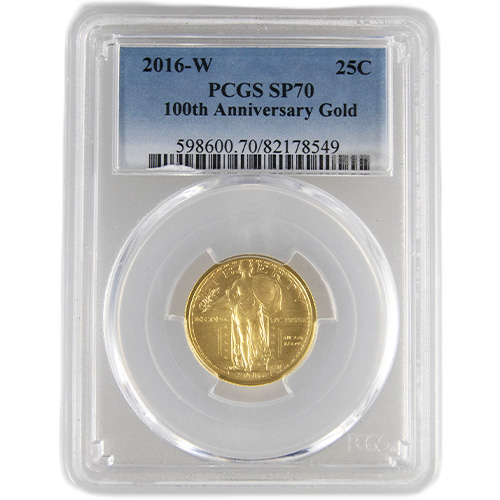 In 1892, the US Mint redesigned the main denominations of silver currency to include new designs on the dime, quarter, and half dollar. Some 24 years later, the time had come to revamp these denominations once again and bring American coin designs into the 21st century. Fast forward another century, and the US Mint issued these images once again, this time on commemorative 24-karat gold coins for sale. Now, 2016-W 1/4 oz Gold American Standing Liberty Quarters in perfect condition are available to you for purchase online from Silver.com.

In the 1910s, the US Mint began to consider revamping silver denominations following the redesign of the US Eagle gold coins in 1907 and 1908. The so-called Barber Coinage was targeted for a refresh. Though Barber submitted his own designs for the revitalization, artwork from Adolph A. Weinman and Hermon Atkins MacNeil was chosen for the coins, with MacNeil’s design gracing the quarter.

Standing Liberty is featured in the obverse design of 2016-W 1/4 oz Gold American Standing Liberty Quarter. This full-length relief shows Liberty standing between the gap of a wall. She clutches an olive branch of peace in her right hand while wielding a shield with the US national seal on it in her left hand.

An American bald eagle is shown in the reverse design field of 2016-W Gold American Standing Liberty Quarters. This design captures the eagle in flight as it glides through the air with its wings flexed.

These 2016-W 1/4 oz Gold American Standing Liberty Quarters are perfect specimens. An SP70 coin is one that showcases full, original mint luster with no detractions present.

Silver.com customer service is available at 888-989-7223. Additionally, you can chat with us live online or simply send us an email with your inquiries.