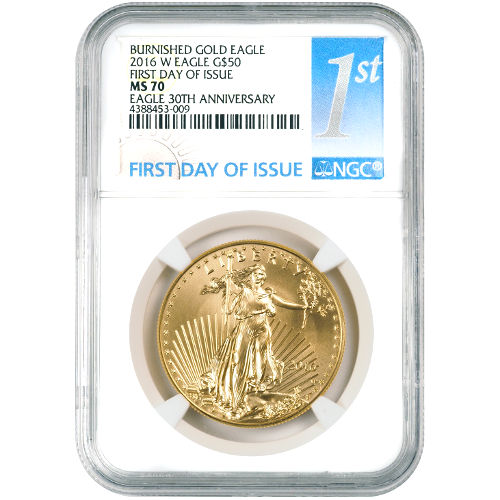 The Burnished Gold American Eagle is a unique collector’s item that takes proof production one step further. Each gold blank starts its production cycle spinning in a drum with metallic balls that burnish and polish the blanks.

Each blank is removed one at a time by mint employees wearing gloves to prevent human skin oils from tarnishing the finish. The blanks are hand-loaded individually into the coining presses, struck, and removed by gloved hands.

First Day of Issue coins earn this designation because they arrive at the NGC depository within 24 hours of the release date set by the US Mint. The 30th Anniversary Label marks the occasion in history for any collector who purchases these coins.

On the obverse, as always, is Augustus Saint-Gaudens’ Liberty design. It features a full-length figure of Liberty striding forward from the national capital of Washington DC holding her torch aloft for the nation as a guiding light.

The reverse of the 2016-W 1 oz Burnished Gold American Eagle bears the image of a family of nesting bald eagles. Created in 1986 by Miley Busiek, it depicts a male eagle returning to the family nest, where a female is vigilantly guarding a group of hatchlings.