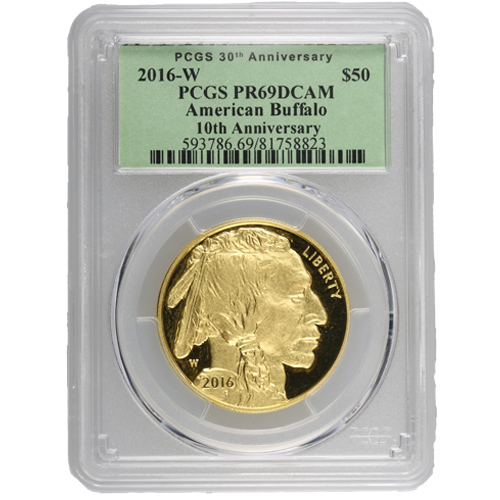 The Gold American Buffalo coin is the purest example of gold bullion from the United States Mint. Introduced in 2006, it became an instant sensation as the first-ever 24-karat gold coin from the mint and because of its use of an iconic American coin design. The 2016-W 1 oz Proof Gold American Buffalo Coin is available to purchase online today at Silver.com with a near-perfect certification.

James Earle Fraser’s classic Buffalo Nickel design from 1913 was chosen as the inspiration for the country’s first-ever 24-karat gold coin. The Gold American Buffalo debuted in 2006, and as of 2016 federal legislation has been passed that guarantees the Gold American Buffalo a place in United States Mint annual striking processes alongside the American Eagle series.

The reverse of the 2016-W 1 oz Proof Gold American Buffalo coin has the image of Black Diamond, a resident bison of the Central Park Zoo in New York City at the turn of the 20th century. Fraser’s inspiration for both the obverse and reverse design of the original Buffalo Nickel came from his childhood growing up in Minnesota and exploring the plains of the Upper Midwest with his father.

The 2016-W 1 oz Proof Gold American Buffalo Coins listed here today are PR69 certified by the PCGS. Gold coins with this certification feature full, original mint luster and a maximum of two minor detracting flaws. These are limited in scope to miniscule hairlines or contact marks, and in range to the areas outside the primary focal points of the coin’s surface.

DCAM coins are special proofs with added visual brilliance. Deep-cameo refers to the intense contrast between the strong, frosted finish of the design features on the coin and the deeply-mirrored, clear background field. The resulting effect gives the design features the appearance of floating above the coin’s background surface.

We encourage all Silver.com customers to contact us with questions at 888-989-7223. You can also connect with us online through our live chat and email features.