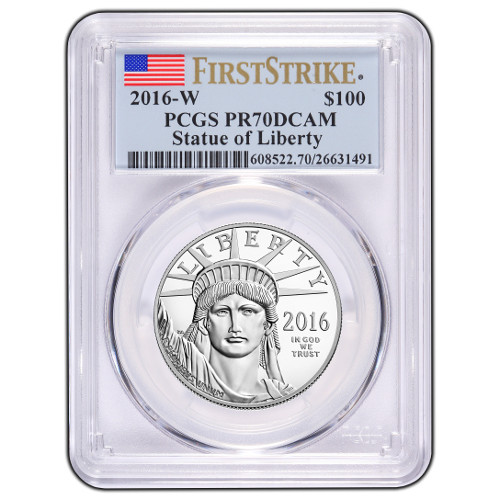 Proof Platinum American Eagle coins are now available from the United States Mint in 2016, but overall mintage is low and the coins are expected to sellout quickly as collectors move to snatch up these brilliant coins. For a limited time, Silver.com has the 2016-W 1 oz Proof Platinum American Eagle coin available for purchase with perfect certification from the PCGS.

Each 2016-W 1 oz Proof Platinum American Eagle coin in this Silver.com product listing is considered a perfect specimen by the PCGS. Coins in this condition exhibit their full, original mint luster and lack any detracting flaws.

As a First Strike coin, these Proof Platinum American Eagle coins arrived at the PCGS depository within the first 30 days of the 2016 issue date as set by the United States Mint.

A Deep-cameo coin is a proof specimen with a unique finish not found on all proofs. The design set of the reverse and obverse features a strong, frosted finish that perfectly contrasts with the deeply-mirrored, clear background field on both sides of the coin.

On the obverse of the 2016-W 1 oz Proof Platinum American Eagle you’ll find the Portraits of Liberty design. In use since 1997, it features a close-up image of the Statue of Liberty’s head, focusing on her gaze as she looks off into the future of the country.

The reverse of the coin features the Torches of Enlightenment design. This the second and final installment in the Torches of Liberty design series from US Mint Artistic Infusion Program designer Paul C. Balan and US Mint Engraver-Sculptor Joseph Menna.

Proof Platinum American Eagle coins have very low mintages, meaning these platinum coins sellout fast. The US Mint has raised mintage in 2016 to 10,000, which is more than double the 4,000 coins of 2015, but there’s no time to waste if you are interested in this beautiful collector’s item.

Please direct your questions to a Silver.com associate on the phone at 888-989-7223. You can also connect with us online using our live web chat or email features.