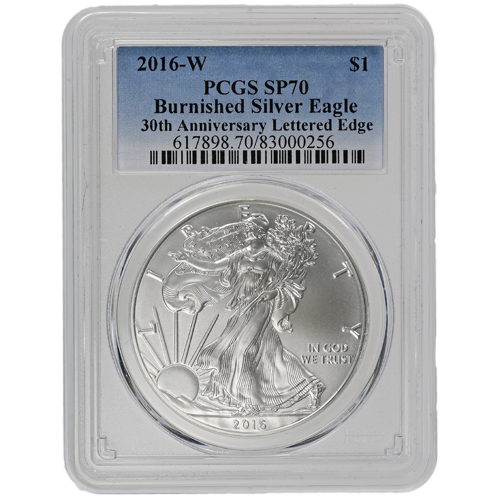 The Silver American Eagle originated as a means of making extra money for the federal government in 1986. Congress authorized the release of Defense National Stockpile stores of silver to produce an official bullion coin for the United States. Originally the coin was available in bullion and proof only.

All 2016-W Burnished Silver American Eagle coins in this product listing is a perfect specimen according to the PCGS. Coins with an SP70 grade from the PCGS have full, original mint luster and lack any detracting flaws on the surfaces.

On the obverse of each 2016-W Burnished Silver American Eagle coin is Adolph A. Weinman’s Walking Liberty design. This depiction of Liberty is meant to represent the nation’s drive to consistently march toward a brighter future, as depicted by Liberty leading the nation forward with her right hand outstretched and the American flag draped over her shoulders.

The heraldic eagle of the United States graces the reverse of the coin. The reverse design comes from then-US Mint Chief Engraver John Mercanti, who created the image in 1986 for this coin. A modern interpretation of a coining symbol used since 1794, it depicts the American bald eagle behind the national heraldic shield as it clutches arrows in one talon and an olive branch in the other.

Please direct your questions regarding these coins to Silver.com customer service. Our team members are available at 888-989-7223, on the web using our live chat, or at our email address. You can also check our website to find today’s silver price.