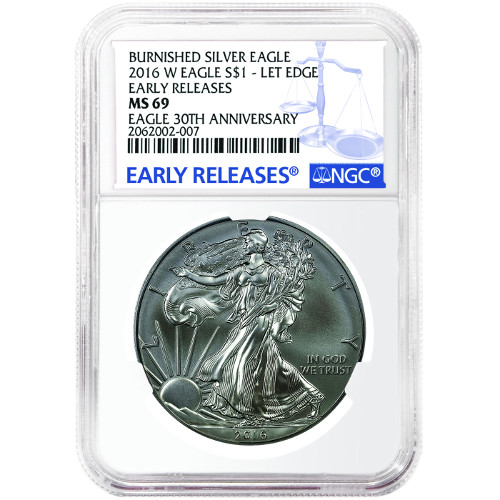 Silver American Eagle coins have been produced by the United States Mint for almost 30 years now. The first coins were introduced in 1986, designed to attract the attention of investors and collectors. Today a third version of the coin is available that is marketed directly to those who enjoy coin display and exhibition. Now, the 2016-W Burnished Silver American Eagle Coin is available online with certification at Silver.com.

Each Burnished Silver American Eagle coin is given special treatment to ensure its stunning finish after coining. The blanks are first treated in drum that swirls them with a mixture to burnish the surface. Each blank is then hand loaded into the coining press one at a time by individuals wearing gloves to avoid human skin oils from tarnishing the finish. As each coin is struck, it is removed by gloved hands, as well.

The obverse of the 2016-W Burnished Silver American Eagle coin includes Adolph A. Weinman’s iconic Walking Liberty design. This was created in 1916 and used on the nation’s 50-cent piece through 1947. It depicts Lady Liberty as she strides forward into a brighter future, as indicated by her march toward the setting sun.

On the reverse of all 2016-W Burnished Silver American Eagle coins is the image of the heraldic eagle of the United States. Created in 1794, this 1986 refinement of the design was completed by John Mercanti, who at the time served as the Chief Engraver of the United States Mint. The heraldic eagle features the American bald eagle set behind the nation’s shield, clutching its arrows of war in one talon and the olive branch of peace in the other.

Each of the 2016-W Burnished Silver American Eagle coins offered today by Silver.com are considered near-perfect specimens by the NGC. Coins with an MS69 grade have their full, original mint luster, but also feature a maximum of two minor detracting flaws, such as minuscule contact marks or blemishes.

Part of the Early Release Series, these Silver American Eagle coins were shipped to the NGC or an NGC-approved facility in sealed mint boxes from the US Mint. In order to qualify, these coins must arrive within the first 30 days of their release by the mint.

Please direct your questions to a Silver.com associate at 888-989-7223. Our customer service team is also available online using our live chat and email features.