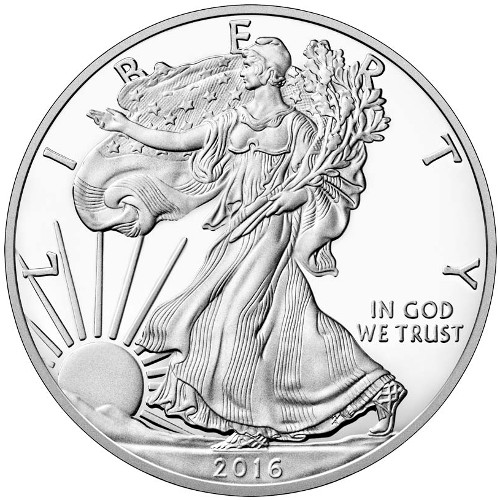 Introduced in 1986, the Silver American Eagle is the official silver coin of the United States. The proof and bullion versions of the coin were introduced in the first year, with the bullion coin struck every year since, and the proof struck every year except for 2009. A burnished version was added in 2006 to the Silver American Eagle series, but was not struck in 2009 or 2010.

For the 30th anniversary of the Silver American Eagle, the United States Mint has announced that it will add edge lettering to its proof and burnished versions. This is the first time in US Mint history that edge lettering will be used. The bullion coins will continue to feature the reeded edge, and in 2017 the reeded edge will return to the proof and burnished versions.

The obverse side of Silver American Eagle coins features one of the most iconic images from American coinage history: Walking Liberty. Created in 1916 by Adolph A. Weinman, it depicts Lady Liberty as she marches toward the setting sun in search of a brighter future.

On the reverse is one of America’s oldest coin images, that of the heraldic eagle. Modernized and refined for use on these coins by John Mercanti, then-Chief Engraver of the US Mint, this image is currently found exclusively on the Silver Eagle.

If you have any questions, please don’t hesitate to ask. A Silver.com associate is available at 888-989-7223, online using our live chat, and via email.