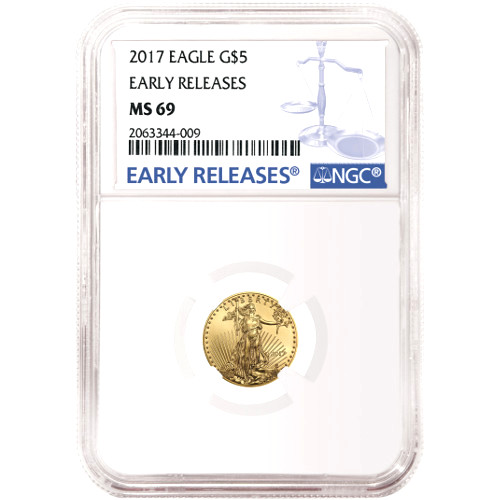 Gold American Eagles are the most popular gold bullion coins from the United States Mint, annually topping the Gold American Buffalo and providing investors around the globe with a proven, safe gold investment option. Part of the larger American Eagle series, these brilliant coins are an annual release from the mint. Right now, the 2017 1/10 oz Gold American Eagle Coin is available to purchase online at Silver.com.

Each 2017 1/10 oz Gold American Eagle available to you today is a near-perfect Mint State 69 according to the NGC. Coins in MS69 condition exhibit full, original mint luster and feature a maximum of two minor detracting flaws that are limited to miniscule contact marks or hairlines.

Early Release is a designation that identifies coins which arrive for certification within a certain timeframe. These coins arrived at the NGC or an approved third-party depository within the first 30 days of the issue date set by the US Mint for 2017 Gold Eagles.

Early Release designation gold coins are sought after in anticipation for gold’s continued historic value, which you can monitor minute by minute via our gold price chart.

On the obverse face of the 2017 1/10 oz Gold American Eagle coin is the image of Lady Liberty from Augustus Saint-Gaudens. His depiction was created in 1907 for use on the $20 Gold Double Eagle coin, and features a full-length figure of Liberty walking forward from Washington DC.

The reverse side of the Gold American Eagle coin bears the image of a family of bald eagles. In this depiction from Miley Busiek, the male bald eagle is shown flying over the family nest where a group of hatchlings remains under the guard of a female eagle.

If you have any questions, please feel free to contact Silver.com. Our customer service associates are available on the phone at 888-989-7223, online using our live web chat feature, and via our email address.