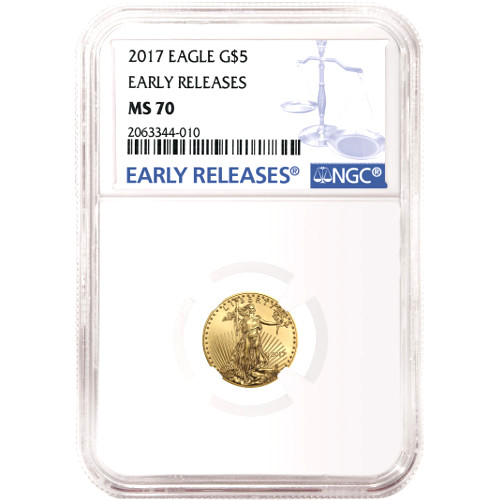 Beginning in 1837, the US Mint officially lowered the metal content of gold coins to .900, although no coins after 1834 had featured anything higher. Throughout the next 100 years of American gold coinage, purity was pinned at .900. When the 1/10 oz Gold American Eagle was introduced along with its counterparts in 1986, it was the purest gold coin available from US Mint.

All 2017 1/10 oz Gold American Eagle coins are available here today in perfect condition. Mint State 70 coins from the NGC have full, original mint luster and lack all detracting flaws on the surface areas. Early Release coins arrive at the NGC for certification within the opening 30 days of the release date the US Mint sets for 2017 Gold Eagles.

On the obverse side of each Gold American Eagle is Saint-Gaudens’ depiction. His original design required updating for use on the Gold American Eagle. The original Lady Liberty design was encircled by just 46 stars, representing the number of states at the time. The coins now bears 50 stars to represent all of the current states.

Early Release designation gold coins are sought after in anticipation for gold’s continued historic value, which you can monitor minute by minute via our gold price chart.

The reverse bears the image of a family of nesting bald eagles. Created by Miley Busiek in 1986, this image is an exclusive design for the Gold American Eagle coin series. Busiek is a nationally recognized sculptor who has worked with the United States Department of the Treasury, Department of Defense, and Bureau of Engraving and Printing, among others.

Please feel free to contact Silver.com with any questions. Our customer service team is available at 888-989-7223, online via our live web chat, and through our email address.