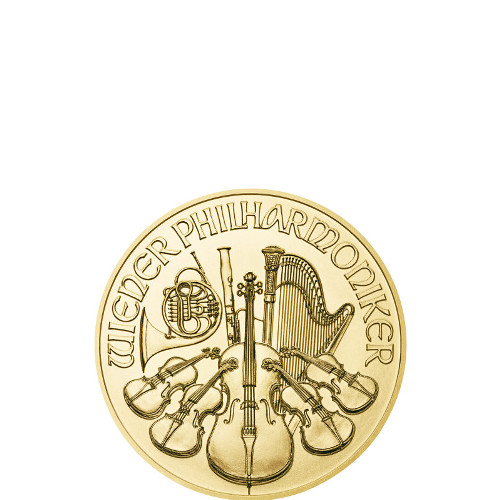 National bullion coin programs famously depict inspirational symbols or wildlife found natively within a specific region. For the nation of Austria, its culture is on full display on the obverse and reverse of the official gold bullion coin of the country, the Gold Austrian Philharmonic. With imagery representative of the famed Vienna Philharmonic Orchestra, it is one of the most beloved coins in Europe. Right now, the 2017 1/10 oz Gold Austrian Philharmonic Coin is available to purchase online at Silver.com.

More and more often investors are buying gold in fractionals to meet their needs because of their divisibility. Gold prices change frequently, but can always be divided or multiplied to get your fractional piece’s spot value.

Each of the 2017 1/10 oz Gold Austrian Philharmonic Coins in this product listing are in BU condition. Coins in this condition have no sign of wear and tear, however you may notice minor flaws that include breaks in the luster, spotted surfaces, and contact marks.

The Austrian Mint released the nation’s first-ever gold bullion coin in 1989 with its Gold Austrian Philharmonic. The coin’s design came from Austrian Mint engraver Thomas Pesendorfer, and featured imagery on both sides representing the Vienna Philharmonic orchestra. Originally formed in 1842, it is one the longest running and most popular orchestras in the world today.

The obverse of the Gold Austrian Philharmonic Coin includes the image of the Great Pipe Organ, which is located inside of the Musikverein Golden Hall in Vienna, which is the national capital of the nation of Austria.

On the reverse of the 2017 1/10 oz Gold Austrian Philharmonic Coin you’ll find a selection of various musical instruments which are commonly used by members of the Vienna Philharmonic Orchestra, which was formed in 1842 and is considered one of the finest orchestras in the world today.

These coins are struck on an annual basis by the Austrian Mint. Founded in 1194 by Duke Leopold V of Austria, the original precious metals produced here consisted of 15 tonnes of silver paid as ransom by England’s King Richard the Lionheart to secure safe passage for his troops returning from the Crusades in the Middle East.

If you have any questions, please don’t hesitate to ask. Silver.com associates are available to you at 888-989-7223, online using our live web chat, or via our email address.