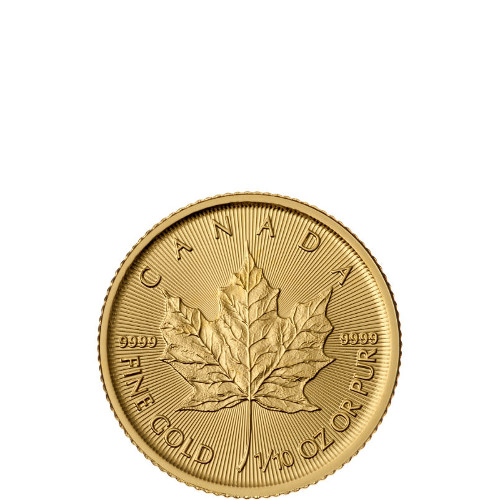 Gold Canadian Maple Leaf coins were the first coins other than the South African Krugerrand offered as gold bullion investment products for private purchasers. The economic boycott of South Africa, due to its apartheid system, led to a ban on the import of Krugerrands in many other countries. The Gold Canadian Maple Leaf filled that void and has grown in importance over the decades.

The obverse of the 2017 Gold Canadian Maple Leaf includes the portrait of Queen Elizabeth II. Her Majesty appears on the obverse of all Canadian coinage issued by the Royal Canadian Mint, and this 2003 depiction from Susanna Blunt is the third to appear on the Gold Maple Leaf.

On the reverse of the 2017 1/10 oz Gold Canadian Maple Leaf Coin you’ll find the iconic sugar maple leaf design in the center. Engravings surrounding the maple leaf include the nation of issue, purity, metal content, and weight of the coin.

All of the 2017 1/10 oz Gold Canadian Maple Leaf Coins in this Silver.com listing are in BU condition. Coins in this condition exhibit no signs of wear and tear, though you may notice minor flaws ranging from breaks in the luster and spotted surfaces to contact marks from the coining process.

Founded in 1908, the Royal Canadian Mint is the official sovereign mint of Canada. The mint was opened in Ottawa to help the nation strike its own coins independently without the aid of the Royal Mint in London. Today, an additional facility exists in Winnipeg that was opened in 1980 to help expand capacity.

We encourage all Silver.com shoppers to reach out to us with questions. You can reach our customer service team on the phone at 888-989-7223, online using our live web chat, and via our email address.