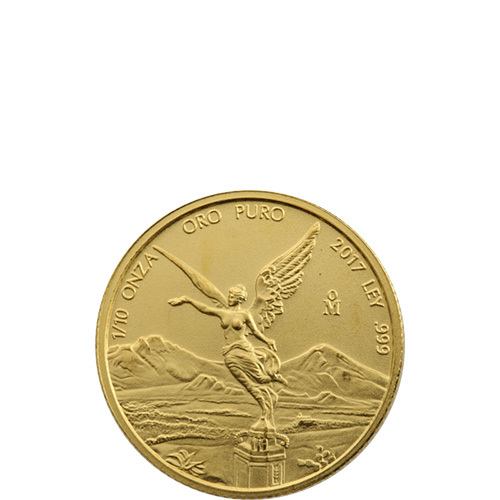 Gold Mexican Libertad coins are a direct reflection of the original gold Centenario coins of the Mexican Mint. While the latter was struck to commemorate the nation’s 100th anniversary of independence, the Gold Libertad is a modern gold bullion coin that serves as the official gold bullion product of the nation. The 2017 1/20 oz Gold Mexican Libertad is available to you online at Silver.com.

Gold Libertad coins debuted from the Mexican Mint in 1981 with three weights available; ¼ oz, ½ oz, and 1 oz. The coins were available for just one year and then discontinued until 1991. When the series reemerged, the Gold Libertad had a new 1/10 oz Gold Libertad option and a 1/20 oz coin.

Mintage figures for the Gold Libertad series have always been restricted to incredibly low levels by the Mexican Mint. The highest mintage of any year for the 1/10 oz Gold Mexican Libertad came in just its second year of availability when 50,777 coins were struck. The lowest single-year mintage came in 2003 when just 300 coins were struck.

The 2016 release of 1/10 oz coins was the highest mintage figure among the fractional weights at 3,800, but also represented a dip from the previous year.

On the reverse of all 2017 1/10 oz Gold Mexican Libertad coins you’ll find the image of the nation’s coat of arms. The Mexican Coat of arms depicts an eagle perched on a cactus while locked in battle with a serpent. In the design, the eagle reflects Mexico while the serpent was a symbol of Spanish colonial tyranny.

The obverse of the 2017 1/10 oz Gold Libertad includes the famous image of Winged Victory. A symbol of the Mexican people’s struggle for independence, she is depicted in the foreground with the historic volcanic peaks of Popocatepetl and Iztaccihuatl rising toward the horizon in the background.

Your 2017 1/10 oz Gold Mexican Libertad available for purchase here today is in BU condition. Coins in this condition show no signs of wear and tear, but minor flaws are possible in the visual appearance. Breaks in the luster, spotted surfaces, and contact marks are the most common of these flaws and result from the striking of blanks during production.

We encourage all Silver.com customers to call us at 888-989-7223 with questions. You can also reach out to us online using our live chat and email, or visit our homepage at any time for gold and silver prices today!