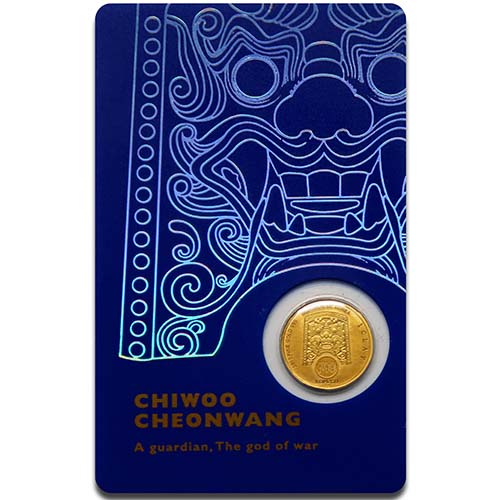 It didn’t take long for those buying gold online to discover the new South Korean Chiwoo Cheonwang series. Introduced in 2016 with 1 oz silver and gold versions of the medallion, both in very low mintage figures, the series sold out quickly. Now there’s a new release available in the collection. Right now, 2017 1/10 oz Gold South Korean Chiwoo Cheonwang Medallion is available to purchase online at Silver.com in the blue label package.

All 2017 1/10 oz Gold South Korean Chiwoo Cheonwang Medallions listed here today are available to you inside of sealed plastic assay cards. The reverse side of the card features the identifying information of the gold medallion, while the color identifies the medallion’s percentage of the overall production.

KOMSCO issued the all-new 1/10 oz Gold South Korean Chiwoo Cheonwang’s with four different, colorized labels. The white label packaging represents the greatest percentage of the production at 10,000 of the 25,000 total medallions. The remaining three colors, including these blue labels, account for just 5,000 each.

On the obverse of all 2017 1/10 oz Gold South Korean Chiwoo Cheonwang Medallions you’ll find the image of the battle shield used by Chiwoo. On the face of it is the image of Chiwoo’s face as viewed with the mask he wore in battle. It is said that he would exhale fog to consume the battlefield and blind his opponents, while also controlling the weather during battle.

KOMSCO is the official sovereign mint of the Republic of Korea. Located in Daejeon, South Korea, the facility was opened in 1951 and handles the production of not just South Korean currency, but also coinage and currency for various other nations.

If you have any questions, please don’t hesitate to contact Silver.com. Our customer service team is available at 888-989-7223, online using our live web chat, and via our email address. You can also research prices with our gold spot price charts online!