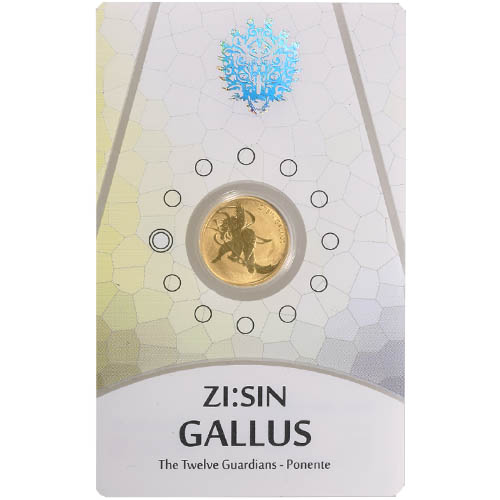 The Zi:Sin Series from KOMSCO is the South Korean mint’s response to lunar-themed collections. Each of the 12 Guardians depicted in this series wears a mythical creature helmet matching the animal depicted on Zodiac for that particular year. The first release in the series depicted Gallus, whose tall war helmet reflects the appearance of a rooster’s plumage. The 2017 1/10 oz Gold South Korean Zi:Sin Gallus Medal is now available to you for purchase online at Silver.com.

The twelve designs in the Zi:Sin Series from KOMSCO represent the 12 guardians. These individuals are the leaders of God’s armies when the forces of evil gather and threaten the human world. Each one of these individuals has unique characteristics and abilities that can help in the battle between good and evil.

Gallus, like the other members of the 12 Guardians, is assigned to watch over the world for the rise of evil from a different direction. Gallus is the lead design in this series and features his distinctive battle armor. Wielding a spear in his hands, Gallus wears a tall helmet that delivers some of his many powers. The tall helmet with plumage similar to that of a rooster allows him the foresight to figure out what outcomes will come from different actions.

The reverse of 2017 1/10 oz Gold South Korean Zi:Sin Gallus Medal includes a depiction of the guardian known as Gallus. He stands ready for battle with a long spear in hand and his plumed helmet on his head. In addition to his foresight, Gallus also has the power to harness a light brighter than the sun and unleash it on the field of battle. Not only does this light blind his enemies, it helps to keep evil at bay.

On the obverse of 2017 Gold South Korean Zi:Sin Gallus Medals is a depiction of Do ggae bi on the shield of Chiwoo Cheonwang. The image of Do ggae bi is similar to Western hobgoblins and is said to have the power to ward off evil forces.

These 2017 1/10 oz Gold South Korean Zi:Sin Gallus Medals feature inside of an assay card that protects the Brilliant Uncirculated condition. The gold bullion medals are in assay cards that have a certificate number on one side.

We encourage Silver.com customers to call us at 888-989-7223 with questions. You can also connect to us online through our live chat and email address.