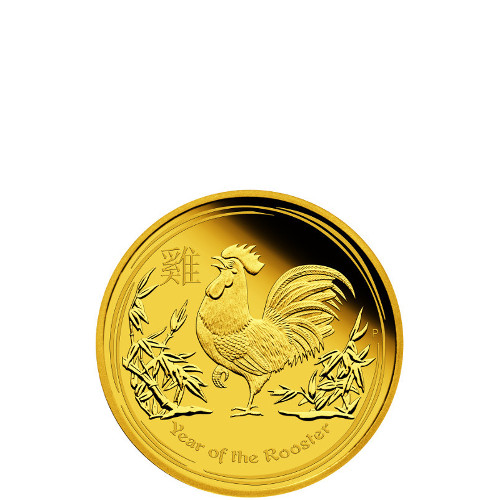 The Lunar Series II program from the Perth Mint is targeted by investors and collectors alike with each new annual release. The bullion coins feature .9999 fineness in both gold and silver, while the ever-changing reverse designs make for a great collectible piece for any numismatist. Today, the 2017 1/10 oz Proof Gold Australian Rooster Coin is available to purchase online at Silver.com.

2017 marks the celebration of the Year of the Rooster on the Chinese Lunar Calendar. The 12-year cycle of the Zodiac features 12 different animals in total, with each said to impart its emotional and character traits onto those born under its sign.

The obverse of all coins in the Proof Gold Australian Rooster series features the right-profile portrait of Queen Elizabeth II. Included along with Her Majesty’s image are engravings that read “Elizabeth II,” “Australia,” “2017,” “15 Dollars,” and “1/10 oz 9999 Gold.”

On the reverse of each 2017 1/10 oz Proof Gold Australian Rooster Coin is the Year of the Rooster image, which is not only unique to 2017 and Lunar Series II, but also exclusive to the gold version of the coin. It includes only a single rooster, with engravings of “Year of Rooster,” the Perth Mint’s “P” mint mark, and the Chinese symbol for rooster.

Located in Perth, Western Australia, the Perth Mint holds the distinction of being the oldest operating facility in the country. Originally part of the British Royal Mint system, today it is owned by the state government of Western Australia and independent of the younger Royal Australian Mint; the nation’s sovereign mint since 1965.

Please direct your questions to a Silver.com associate at 888-989-7223. You can also connect with us online using our live web chat or email address.