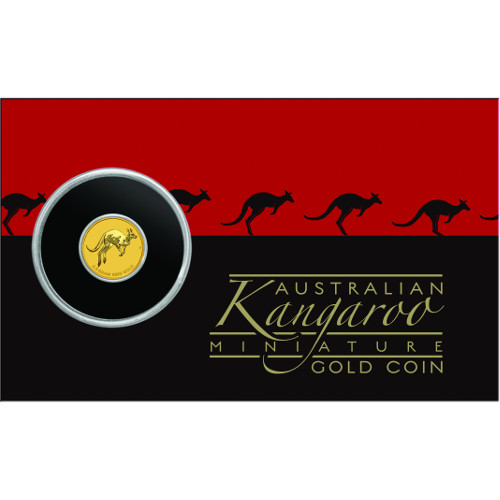 The Gold Australian Kangaroo is the longest running coin series from the Perth Mint, though it has undergone a name and design change once in its now-30-year history. Originally introduced as the Gold Nugget, these coins feature a new kangaroo design on the reverse each year. Today, the unique 2017 ½ Gram Gold Australian Mini Roo is available to you online at Silver.com.

Gold Australian Kangaroo coins began life in 1986 as the Gold Australian Nugget. The nation’s natural reserves of gold were a popular attraction in the 19th century for those seeking a fortune. After just four years of use though, the Perth Min switched to using a new kangaroo design each year, calling to mind the nation’s beloved animal species.

The Gold Australian Mini Roo is an exciting option for any gold investor or collector. Featuring .9999 fine gold content and an extremely affordable pricing point because of its low weight, the Mini Roo returns in 2017 as an additional option for those investors or collectors looking for just the right gift, for themselves or someone else.

All 2017 ½  Gram Gold Australian Kangaroo coins in this product listing ship in a protective themed presentation card and are in BU condition. Coins in this condition have no signs of wear and tear. However, you may notice minor flaws on the coin such as breaks in the luster, spotted surfaces, or contact marks from the coining process.

On the reverse side of the 2017 1/2 Gram Gold Australian Mini Roo is the image of a red kangaroo subspecies as it leaps across the open plain of the design field. The creatures often feature on Australian coinage, such as the all-new Australian Silver Kangaroo bullion coin and the annual-release Gold Australian Kangaroo.

The obverse of the 2017 1/2 Gram Gold Australian Mini Roo coin includes the right-profile portrait of Queen Elizabeth II. The image of Her Majesty in use on Australian coinage today is Ian Rank-Broadley’s fourth-generation depiction created in 1998 for use on commonwealth and British coinage.

Perth Mint is responsible for the coining of all Gold Australian Kangaroo products. The mint was opened in 1899 as a Royal Mint facility by the British, but today is owned by the state government of Western Australia. The Currency Act of 1965 established the Royal Australian Mint as the sovereign mint and gave Perth Mint coins legal tender status.

Please direct your questions regarding these coins to Silver.com. Our customer service team is available at 888-989-7223, online using our live chat, and via our email address.