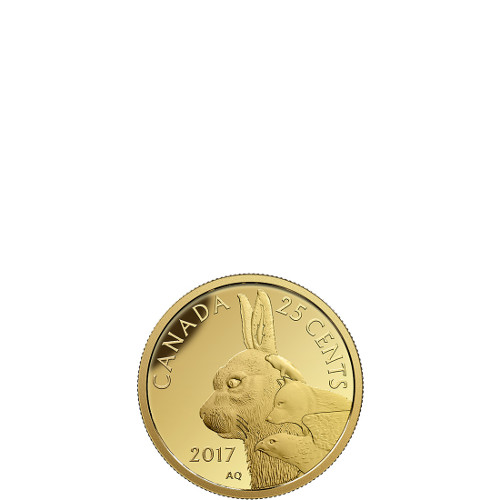 One of the few species capable of surviving the harsh environments of the Arctic Circle is the Arctic Hare. Also known as the polar rabbit, this species of hare is highly adapted to living in the tundra and other icy biomes around the world. Right now, the 2017 ½ Gram Proof Gold Canadian Predator v. Prey Inuit Arctic Hare Coin is available to purchase online at Silver.com.

These 2017 ½ Gram Proof Gold Canadian Predator vs. Prey Inuit Arctic Hare Coins are the final release of the collection. Your individual coin ships to you inside of a maroon clamshell with a black beauty box, and represents the smallest gold coin struck by the Royal Canadian Mint.

Arctic Hares are not your average rabbit running around the backyards of homes across North America. The hearty species depicted on this gold coin has shortened ears and limbs, with a small nose and body fat that accounts for 20% of its overall body. Arctic Hares dig holes into the ground or under snow to keep warm at night and sleep.

The design on the reverse of the 2017 ½ Gram Proof Gold Canadian Predator vs. Prey Inuit Arctic Hare Coin includes a design from Andrew Qappik that re-envisions the traditional imagery of the Arctic Hare used in Inuit art. This detailed engraving brings the animal to life, with the prey’s profile including the image of its predators.

On the obverse of the coin is the right-profile image of Queen Elizabeth II. Her Majesty’s effigy has appeared on the obverse of Canadian coinage since 1952 when she ascended to the throne of Britain, with this particular design from Susanna Blunt in 2003.

If you have any questions about these gold coins, please feel free to contact Silver.com. Call us at 888-989-7223, chat with us live online, or send us an email with your inquiries. You can also stay updated on the current price of gold through our website every day.