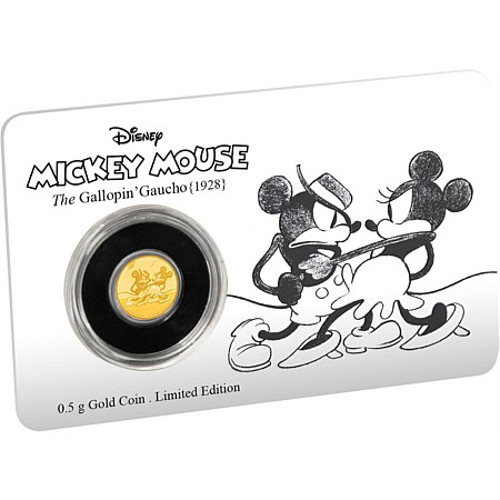 The first release of 2017 in the Mickey Through the Ages collection at the New Zealand Mint is here. Transporting viewers back almost 90 years, the Gallopin’ Gaucho coin focuses on Mickey’s role as an Argentine cowboy in the 1928 animated short The Gallopin’ Gaucho. Right now, the 2017 ½ Gram Gold Niue Mickey Mouse Gallopin’ Gaucho Series Proof Coin is available to purchase online at Silver.com.

All 2017 ½ Gram Gold Niue Mickey Mouse Gallopin’ Gaucho Series Proof Coins in this listing is part of the Mickey Through the Ages collection from the New Zealand Mint. Your 2017 1/2 Gram Gallopin’ Gaucho Gold Proof ships sealed inside of a themed presentation card, which includes a Certificate of Authenticity printed on the back side of the card.

Mickey Through the Ages launched in 2016 with four exciting new designs, each one chronicling the changing imagery and various roles of Mickey Mouse at a time when he was anything but the global icon he is today. Previous releases include depictions of Mickey from The Band Concert, Plane Crazy, the Brave Little Tailor, and Fantasia.

In The Gallopin’ Gaucho, Mickey plays the role of a cowboy from the plains of Argentina. The six-minute animated short is based upon Douglas Fairbanks’ The Gaucho, which took place in the Pampas of Argentina, and depicts the cowboy life of South America’s famed gauchos.

On the reverse of the 2017 ½ Gram Gold Niue Mickey Mouse Gallopin’ Gaucho Series Proof coin you’ll find the image of Mickey from the feature film. Mickey and Minnie Mouse both appeared together again in The Gallopin’ Gaucho, and the six-minute film marked the last time that Walt Disney performed the voice of Minnie in cartoons.

The obverse of all 2017 ½ Gram Gold Niue Mickey Mouse Gallopin’ Gaucho Series Proof coins includes the image of Queen Elizabeth II. Her Majesty’s right-profile portrait is from 1998 and was created by Ian Rank-Broadley, and appears on the obverse of all commonwealth coinage.

Located in Auckland, the New Zealand Mint is the only operational mint facility in the country. However, it is not the sovereign mint of the nation, but instead operates as a private company. All New Zealand currency is struck by the Royal Canadian Mint and Royal Mint instead.