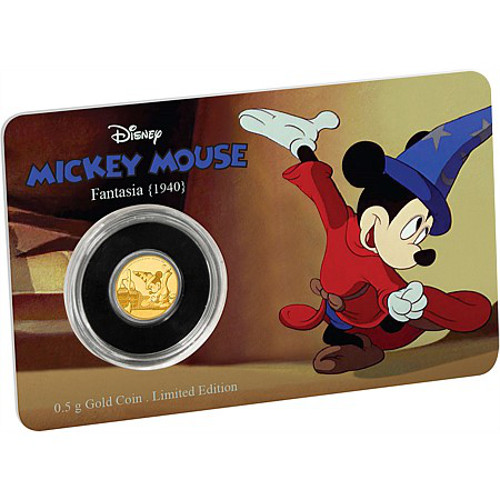 Mickey Mouse is one of the most recognizable characters in the world. Although Mickey has been in a number of movies and short films, many people will recognize the movie Fantasia. As just the third full-length movie from Disney, the movie was released in November of 1940. The movie debuted in 13 cities, which took a toll on the financial viability of the film. The New Zealand Mint is commemorating the film with a new gold coin. The 2017 1/2 Gram Gold Niue Mickey Mouse Fantasia Series Proof Coin is now available at Silver.com.

When Fantasia was released, Disney leased theaters to install the special Fantasound systems that were created to deliver the best sound possible for this animated film. Now, Fantasia is considered one of the most successful films, but at first, the company had a lot of issues with profit due to the costs associated with the Fantasound installations and theater leasing.

On the obverse of each 2017 1/2 Gram Gold Niue Mickey Mouse Fantasia Series Proof Coin, you will see the fourth-generation rendition of Queen Elizabeth II’s portrait. This image is a right-profile image that was created in 1998 by Ian Rank-Broadley. Queen Elizabeth II has had her image featured on all British, Australian and commonwealth coinage since she took the throne in 1952.

The reverse of each of these coins features an image of Mickey Mouse from the film Fantasia. The coin shows Mickey as the Sorcerer’s Apprentice with the famous hat atop his head. He is shown instructing a mop that is carrying two full buckets of water.

Each of these coins will ship out in a sealed plastic card designed with full-color artwork from the film. On the back of the credit-card sized display card, you will see the Certificate of Authenticity for the coins, as well as a serial number and other information on the coin.

All of these 2017 1/2 Gram Gold Niue Mickey Mouse Fantasia Series Proof Coins are minted by the New Zealand Mint. The New Zealand Mint is a private facility located in Auckland. While the mint produces bullion coins for a number of small nations in the South Pacific, it doesn’t mint any official bullion or currency for New Zealand.