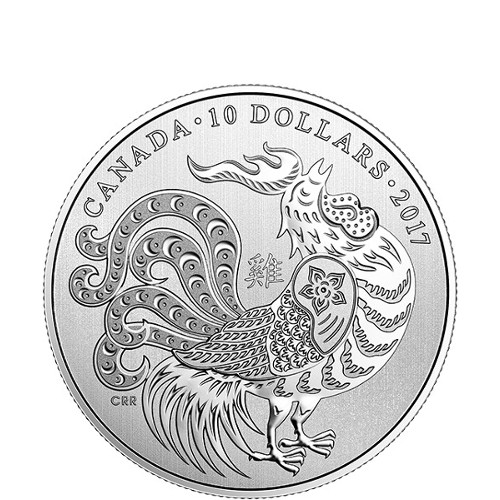 Coins depicting the animals from the Chinese Lunar Calendar have been growing increasingly popular over the last few years. With each annual release of the coins featuring a different animal, these coins can be a fun way to grow an interesting collection. This year’s release is the rooster. Today, the 2017 ½ oz $10 Silver Canadian Year of the Rooster Coin is available to online at Silver.com.

The Royal Canadian Mint’s Lunar Coin Series is in its 8th year; the 2017 release is the Year of the Rooster. The mint hired artist Aries Cheung created the design for the 2017 releases of the Chinese Lunar Calendar coins.

In Chinese culture, the rooster is known for being organized and decisive. People born in the Year of the Rooster, are said to have those same characteristics. They are also viewed as natural performers, witty and self-assured.

Each of the 2017 ½ oz Silver Canadian Year of the Rooster Coins listed here is in BU condition. Coins in BU condition have no signs of wear and tear, though you may notice a range of minor flaws including breaks in the luster, spotted surfaces, and contact marks from the production process at the mint.

Additionally, these Silver Year of the Rooster coins from the Royal Canadian Mint are unique in that they feature a specimen finish even though they are bullion coins. Specimen finish brings a brilliant image relief on a matte or lined background that creates maximum visual impact. This is achieved by striking the coins two times on a numismatic press.

The reverse of the 2017 ½ $10 Silver Canadian Year of the Rooster Coin includes the image of a resourceful and self-assured rooster. Designed by Three Degrees Creative Group, this imagery offers a stylized vision of the rooster and includes the flowers of a gladiola and the Chinese character for rooster.

On the obverse of all Year of the Rooster coinage you’ll find the image of Queen Elizabeth II. Her Majesty’s effigy has appeared on Canadian coinage since she ascended to the throne in 1952, with this particular design created in 2003 by Susanna Blunt.

Please direct your questions to a Silver.com associate at 888-989-7223. You can also connect with us online through our live web chat and email features.