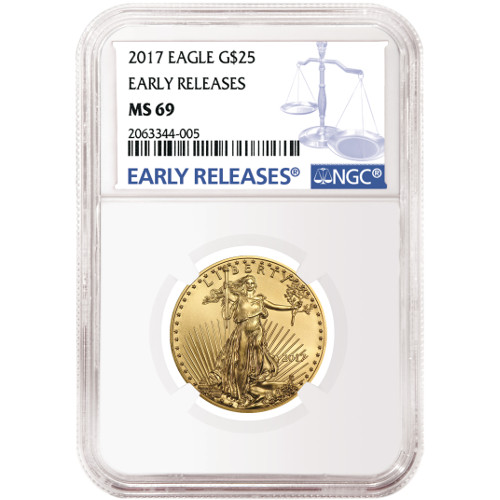 The Gold American Eagle is one of the most coveted and popular coins in the world. Produced by the United States Mint on an annual basis, the proof version of this coin is specially minted with an eye toward the tastes of numismatists and their coin collections, while the bullion version offers a great investment option. Today, the 2017 ½ oz Gold American Eagle coin is available in near-perfect condition on Silver.com.

Gold American Eagle coins were authorized in 1985, the same year as its silver counterpart, but through separate legislation. The Gold Bullion Coin Act of 1985 established the parameters for a coin program that featured bullion and proof versions, four weights (1 oz, ½ oz, ¼ oz, and 1/10 oz), and required that all coins consist only of gold sourced from within the US.

Each 2017 ½ oz Gold American Eagle coin in this listing has a Mint State 69 grade from the NGC. Considered near-perfect specimens, these coins have full, original mint luster and a maximum of two minor detracting flaws. These flaws are limited to minuscule contact marks and hairlines found outside the primary focal areas of the coin.

The Early Release designation is for coins received by the NGC for certification within a set timeframe. The coins must arrive at the NGC or an approved third-party depository within the opening 30 days of issue from the US Mint for 2017 Gold Eagles.

Early Release designation gold coins are sought after in anticipation for gold’s continued historic value, which you can monitor minute by minute via our active charts that show the gold price today and the recent past.

On the obverse is the image of Lady Liberty. Originally created in 1907 by Augustus Saint-Gaudens, its creator never saw it on a US coin. The image appeared on the $20 Gold Double Eagle from 1907 to 1933, but the US Mint did not have coins struck before Saint-Gaudens died from complications due to illness in 1907.

The reverse of the 2017 ½ oz Gold American Eagle Coin features the design of a family of nesting bald eagles. Created in 1986 by Miley Busiek, this image is accompanied by engravings of the coin’s weight, metal content, purity, and face value.

Please feel free to contact Silver.com with questions at 888-989-7223, chat with us live online, or send us an email.