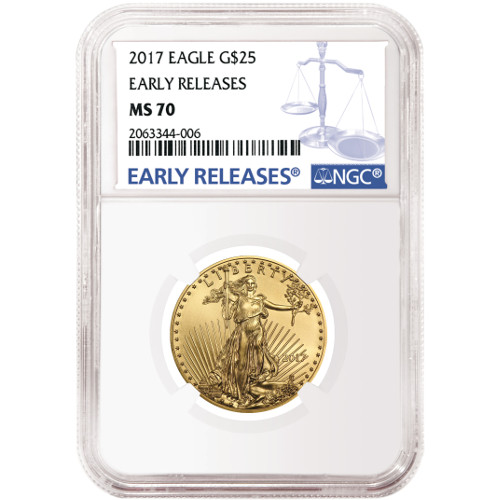 In 1986 the United States Mint unveiled the American Eagle program. The official bullion coins of the nation, the gold variant featured a bullion and proof version that first year. The bullion coin had all four weights, 1 oz, ½ oz, ¼ oz, and 1/10 oz, available immediately. The proof version had just a 1 oz coin in 1986, with the ½ oz added in 1987 and the ¼ and 1/10 oz coins joining in 1988.

The obverse of the 2017 ½ oz Gold American Eagle Coin bears the image of Lady Liberty as created by Augustus Saint-Gaudens. His intricate design shows Liberty marching forth from Washington DC, with the US Capitol Building visible at her feet and the rays of the sun outlining her body from the background. This is considered the greatest design ever used on an American coin, originating in 1907 on the $20 Gold Double Eagle.

On the reverse of the 2017 ½ oz Gold American Eagle is the image of a family of bald eagles in its nest. Created by Miley Busiek exclusively for use on the Gold American Eagle, you’ll notice a male eagle returning to the nest, which holds a group of hatchlings under the cautious eye of a female eagle.

The 2017 ½ oz Gold American Eagles listed here are perfect specimens according to the NGC. Coins with an MS70 grade exhibit full, original mint luster and no detracting flaws of any kind.

The Early Release designation identifies coins that arrive at the NGC or an approved third-party depository within the first 30 days of the issue date for 2017 Gold Eagles by the United States Mint.

Early Release designation gold coins are sought after in anticipation for gold’s continued historic value, which you can monitor minute by minute via our gold spot price chart.

We encourage all Silver.com customers to contact us at 888-989-7223. Silver.com associates are available online as well using our live web chat and email features.