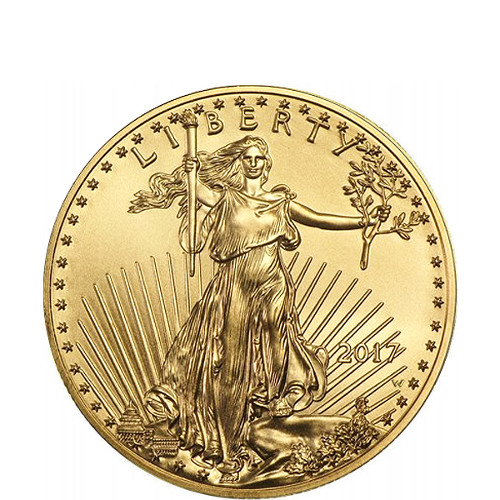 The Gold American Eagle coin is not quite like its counterparts in the silver and platinum version. When the Silver Eagle was released there was only a 1 oz silver coin available, which continues to this day. The Platinum Eagle has toyed with the use of fractional-weights, but again only the 1 oz is regularly struck.

Originally, the ½ oz Gold American Eagle was the most popular among the fractional weights because of its balance between beautiful size and affordable pricing. However, recent years have seen that trend diminish as investors turn to the smaller ¼ and 1/10 oz. coins as the favorite. As of 2016, sales of ½ oz Gold American Eagles were just 63,000 compared to 770,000 for the 1/10 oz version.

The obverse of all 2017 ½ oz Gold American Eagle coins includes Augustus Saint-Gaudens’ brilliant depiction of Liberty. Originally used on the $20 Gold Double Eagle from 1907 to 1933, the image was introduced at first with just 46 stars on it to represent the number of states in the Union. Changes occurred to this design in 1912, with two more stars to represent New Mexico and Arizona, and again for release on the Gold American Eagle with two more stars to bring the total to 50 for Hawaii and Alaska.

On the reverse of Gold American Eagle coins is the depiction of a group of bald eagles in their nest. This family unit includes a group of hatchlings in the nest, a female standing guard over the hatchlings, and a male flying overhead.

We encourage Silver.com shoppers to contact us with questions. You can reach our customer service associates at 888-989-7223, connect with us online through our live chat, or simply send us an email.