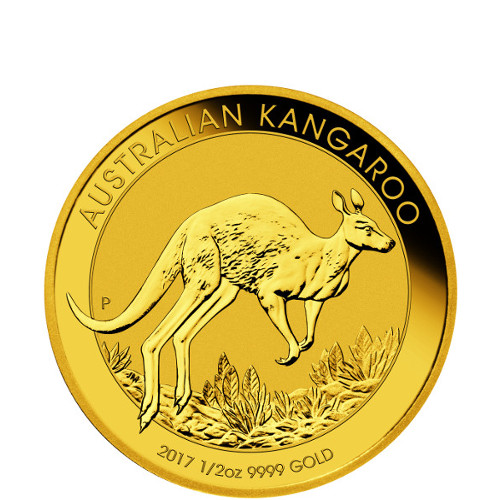 One of the most popular annual releases from the Perth Mint is also one of its longest running. The Gold Australian Kangaroo started its life with a different name and design, but since 1990 has featured the same design motif each year, with new design specifications annually. Right now, the 2017 ½ oz Gold Australian is available online at Silver.com.

Gold Australian Kangaroos were originally released as the Gold Australian Nugget coins. These coins had new designs on the reverse each year as well, but featured a golden nugget rather than the kangaroo. This choice was a nod to the gold mines and reserves found on the continent. The switch to the kangaroo was made in 1990.

On the reverse side of the 2017 ½ oz Gold Australian Kangaroo Coin is the image of a kangaroo hopping through the wide open landscapes of the Australian Outback. This design is brand new for 2017, and includes engravings of the series name, year of issue, weight, purity, and metal content of the coin. There is also a “P” mint mark from the Perth Mint.

The obverse of all Gold Australian Kangaroo coins features the portrait of Queen Elizabeth II. This right-profile effigy was created in 1998 by Ian Rank-Broadley and represents the fourth-generation image of the Queen since she ascended to the throne in 1952.

All 2017 ½ oz Gold Australian Kangaroo Coins in this listing are in BU condition. Coins in BU condition have no signs of wear and tear. However, you may notice minor flaws including breaks in the luster, spotted surfaces, or contact marks from striking during the production process.

The Perth Mint is the oldest operating mint in Australia, having opened in 1899 as part of the Royal Mint system. In the years between 1902 and the founding of the Royal Australian Mint as the new sovereign mint in 1965, the Perth Mint filled a vital role producing Australian coinage. Today it is a leading producer globally of bullion and proof coinage.

If you have any questions, please don’t hesitate to ask. Silver.com associates are available at 888-989-7223, online using our live chat, or via our email address.