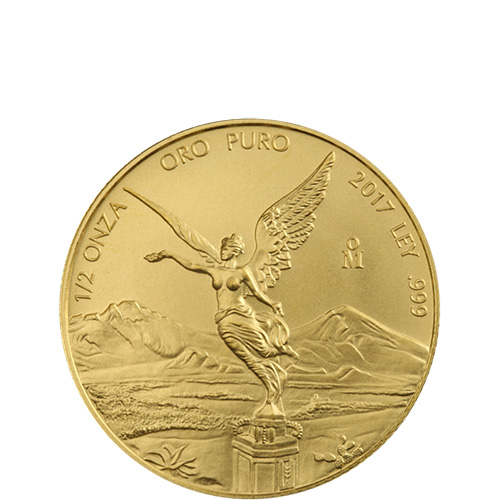 Each of the 1/2 oz Gold Mexican Libertad Coins in this product listing has a BU condition. Coins in this condition have no signs of wear and tear, though you may notice a range of minor flaws that can include breaks in the luster, spotted surfaces, and contact marks from the production process.

The obverse of the Gold Libertad coin has the image of Winged Liberty. Based upon the Greek Goddess of Victory, she was a symbol for the Mexican independence movement during the 19th century and stands today atop the Mexican Independence Victory Column in Mexico City.

The Mexican Mint was formed in 1535 by Spanish conquistadors. Originally used to refine gold and silver from Central and South America, the Mexican Mint eventually became the primary coining facility of the Spanish Empire for its Western Hemisphere colonies.

Please contact Silver.com at 888-989-7223 with questions. You can also reach out to us online through our live chat and email address.