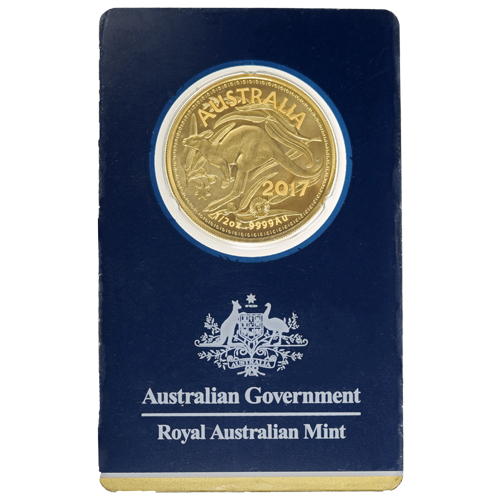 The Gold Kangaroo Series from the Royal Australian Mint is the official gold bullion coin of the federal government in Australia. Released annually in four total weights, today the coin is among the most coveted with investors due to its impressive purity and the lengths the mint goes to to ensure the coin’s quality. Today, the 2017 ½ oz Gold Royal Australian Mint Kangaroo Coin is available to purchase online at Silver.com.

Gold Kangaroo coins from the Royal Australian Mint are inspired in their design by the copper penny issued by the nation from 1938 to 1964. Featuring new effigies on the obverse side each year to represent the current British monarch, these coins were part of the Australian pound when the nation was a commonwealth of Britain.

That original design depicted a red kangaroo, one of the four major subspecies of the world’s largest marsupial species, hopping across the Outback with a Commonwealth Star in the design. The image was created by George Kruger Gray, and was taken out of circulation when decimalization occurred.

On the obverse of the Gold Royal Australian Mint Kangaroo coin you’ll find the right-profile portrait of Queen Elizabeth II. Her Majesty’s effigy is a creation of Ian Rank-Broadley, and was designed in 1998 as the fourth-generation portrait of the Queen to appear on commonwealth coinage.

The reverse of all 2017 ½ oz Gold Royal Australian Mint Kangaroo Coins includes that original design from Gray, with added imagery of the Tasmanian Blue Gum. The kangaroo and Commonwealth Star remain, but the leaves, nuts, and flowers of the plant are included as framing around the edges.

Each 2017 ½ oz Gold Royal Australian Mint Kangaroo coin in this listing is in BU condition. Coins in BU condition have no signs of wear and tear on the surfaces, however you may notice a variety of minor flaws including breaks in the luster, spotted surfaces, and contact marks from the production process.

Please direct your questions to a Silver.com associate at 888-989-7223. You can also reach out to us online through our live chat and email features. If you are looking for similar products, be sure to check out our full selection of Australian Gold Coins.