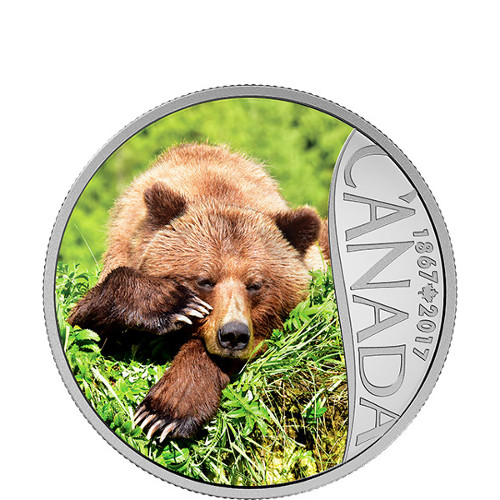 North America is home to vast array of deadly predators in the wild, among them the grey wolf and mountain lion. Although these are definitely predators to be feared and respected by man, the grizzly bear is the one animal all others on the continent should quiver in fear upon sight. Today, the 2017 ½ oz Proof Silver Canadian Celebrating Canada’s 150th Series Grizzly Bear coin is available to you online at Silver.com.

North American grizzly bears used to be more diverse than they are today. There were once more morphological forms considered subspecies of the modern grizzly, including the now-extinct California grizzly and Mexican grizzly bear. Inhabiting regions of the world from Russia, Northern China, and Korea to the United States and Canada, these bears are often larger in stature near the coast, with inland populations smaller.

On the reverse of the 2017 ½ oz Proof Silver Canadian Celebrating Canada’s 150th Grizzly Bear coin is the image of a massive grizzly as it lays in the long grasses enjoying a summer day. Its massive skull and paws are visible as it lounges in the sun, almost squinting its eyes the light is so bright.

The obverse of all 2017 ½ oz Proof Silver Canadian Celebrating Canada’s 150th Grizzly Bear coin includes the right-profile portrait of Queen Elizabeth II. Her Majesty has appeared on British, Canadian, and other commonwealth coins since 1952 when she ascended to the throne of England. This particular design comes from Susanna Blunt and was created in 2003.

Some of the best silver coins for sale in the market today come from The Royal Canadian Mint, which is the official mint of the federal government of Canada. Founded in Ottawa in 1908, it now has a second facility in Winnipeg that was opened in 1980s to help boost capacity in the mint system.

Please don’t hesitate to contact Silver.com with questions. Our customer service team is available at 888-989-7223, online using our live chat, and through our email address.