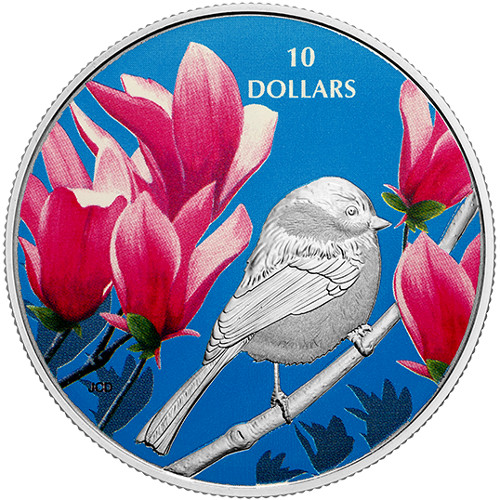 The Birds Among Nature’s Colours from the Royal Canadian Mint is a series of proof silver coins with colorized finishes. The five-coin series depicts different bird species that call the forests of Canada home throughout the year. The debut release in the series focuses on the chickadee. Right now, 2017 1/2 oz Proof Silver Canadian Birds Among Nature’s Colours Chickadee Coins are available to purchase online at Silver.com.

Each 2017 1/2 oz Proof Silver Canadian Birds Among Nature’s Colours Chickadee coin is individually packaged inside of the Royal Canadian Mint’s maroon clamshell display box and comes with a black beauty box. The coins feature a Certificate of Authenticity with a unique serial number on the COA.

Canadian artist Jean-Charles Daumas is the creator of the designs in the Birds Among Nature’s Colours Series. Each reverse design field includes a depiction of the bird represented in the release with a beautiful finish and surrounded by bright colors that capture the beauty of nature as it is meant to be seen.

The reverse of 2017 1/2 oz Proof Silver Canadian Birds Among Nature’s Colours Chickadee Coins includes a field of bright colors that evoke the warmth of May. Soft hues of pink and white from the magnolias surround the chickadee. The chickadee is a small songbird that deserves the title of “hearty.” While other birds featured in this series migrate during the winter months, the chickadee calls Canada home year-round and is hearty enough to endure the brutal cold and snow of the winter months.

On the obverse of 2017 Proof Silver Canadian Chickadee Coins is an effigy of Queen Elizabeth II. This right-profile portrait of Her Majesty was created in 2003 by Susanna Blunt and depicts the Queen with no crown on her head. This is the first monarch portrait since the latter stages of the reign of King George VI to depict the monarch without a crown.

The Royal Canadian Mint is the sovereign mint of Canada. It was founded in Ottawa in 1908 and eventually expanded to include a second facility in Winnipeg. The Ottawa Mint continues the production of silver bullion coins such as these, while the Winnipeg Mint produces circulation coins for the country.