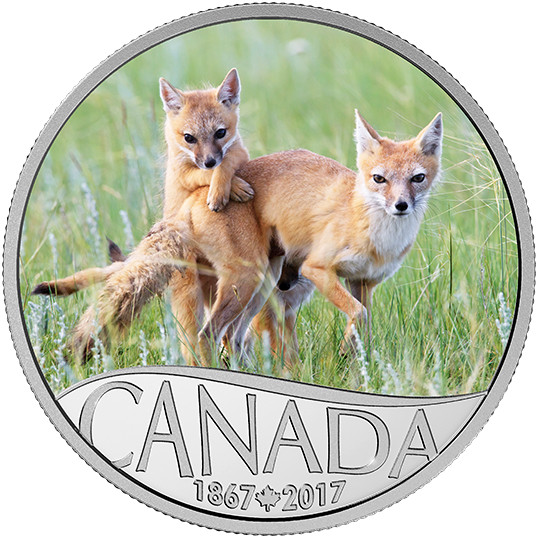 The 2017 release calendar at the Royal Canadian Mint included a variety of coins celebrating the 150th anniversary of the nation’s confederation movement. While many of the designs focused on elements of Canadian national pride, others included designs of Canadian wildlife as part of the celebration. The Wild Swift Fox and Pups design is one such example. Today, 2017 1/2 oz Proof Silver Canadian Celebrating Canada’s 150th Series Wild Swift Fox and Pups Coins are available to you online at Silver.com.

These particular 1/2 oz silver coins for sale come from a 13-coin release series at the Royal Canadian Mint that charts each of the provinces and territories of modern-day Canada. The release schedule introduces fresh designs for each province and territory issued in the order that the respective jurisdictions were admitted into the Canadian confederation that eventually became the independent nation of Canada.

All 2017 1/2 oz Proof Silver Canadian Celebrating Canada’s 150th Series Wild Swift Fox and Pups Coins are housed inside of the Royal Canadian Mint’s maroon clamshell displays with a black beauty box. The coins come with an individually numbered Certificate of Authenticity as well.

The reverse side of all coins in the 2017 1/2 oz Proof Silver Canadian Celebrating Canada’s 150th Series include colorized photos snapped by Canadian wildlife photographers. This image of wild swift fox pups was captured by John E. Marriott in Grasslands National Park of Canada located in the province of Saskatchewan. Commemorative engravings on this side include the dates of “1867-2017” to mark the confederation date and the 150th-anniversary date.

On the obverse of 2017 Proof Silver Canadian Wild Swift Fox and Pups coins is Queen Elizabeth II’s effigy. This right-profile portrait of the Queen was created in 2003 by Susanna Blunt and is the fourth to feature on Canadian coins during the Queen’s reign.