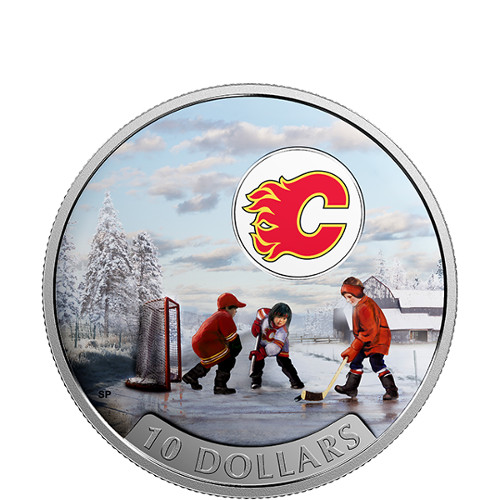 The Passion to Play Series from the Royal Canadian Mint celebrates the deep connection between the people of Canada and their national pastime; hockey. The sport of hockey has been played by young and old alike, professional and amateur in Canada for more than a century now. Right now, the 2017 ½ oz Proof Silver Canadian Passion to Play Calgary Flames Coin is available on Silver.com.

All Passion to Play coins have a common theme in the design, although the specific feature vary from one coin to the next. The reverse face of each coin in the release features a design of children engaged in the sport of hockey outdoors, either on an outdoor rink in winter or on rollerblades and shoes on the streets during summer.

The reverse of the 2017 ½ oz Proof Silver Canadian Passion to Play Calgary Flames Coin includes the image of three children playing some pond hockey in a rural area outside of Calgary. A barn in the distance is covered in snow as the children compete on the ice. This colorized image is capped by the inclusion of the Calgary Flames logo in the upper-right field.

On the obverse of the Silver Canadian Passion to Play Coins is the effigy of Queen Elizabeth II. Created in 2003 by Susanna Blunt, this right-profile portrait was rolled out on Canadian coins starting in 2004 and remains the current design preferred for Her Majesty’s image on currency.

The Calgary Flames play their home games at Scotiabank Saddledome in Calgary, Alberta, Canada. The franchise was originally founded in 1972 in Atlanta, Georgia as the Atlanta Flames, but moved to Calgary for the start of the 1980 season. The Flames are one of two NHL franchises in Alberta, with the other being the Edmonton Oilers. The rivalry between the two is intense and known as the Battle of Alberta.

Each of these 2017 ½ oz Proof Silver Canadian Passion to Play Calgary Flames Coins ships in a maroon clamshell from the Royal Canadian Mint, and is housed inside of a graphic beauty box that replicates the full-color imagery found on the coin’s reverse.

If you have any questions, please don’t hesitate to ask. Silver.com associates are available at 888-989-7223, online through our live chat, and via our email address.