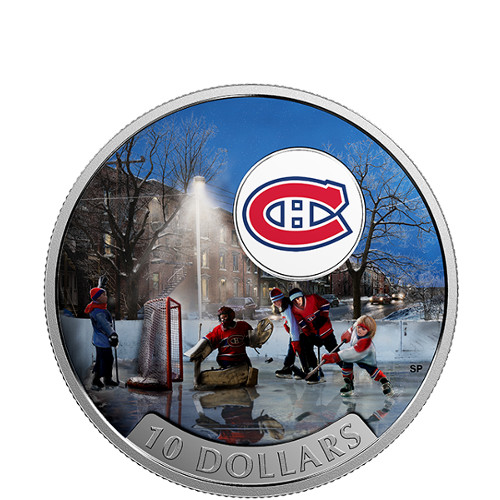 Hockey is the national sport of Canada, and no franchise has better represented the nation or achieved greater success than the Montreal Canadiens. The winningest franchise in terms of major trophies in all of the National Hockey League is Montreal, and the team is one of the founding six members of the NHL. The 2017 ½ oz Proof Silver Canadian Passion to Play Montreal Canadiens Coin is available now on Silver.com.

The Montreal Canadiens are the equivalent of hockey royalty. Officially known as le Club du hockey Canadien, the franchise and its fans are notoriously fickle about their head coach knowing the French language because of the French-Canadian makeup of Quebec demographically.

Founded in 1909, the Habs, as the team is known, are the longest continuously operating professional ice hockey team in the world. The franchise is also the only existing NHL club that predates the formation of the National Hockey League, and with 24 Stanley Cup titles, Montreal is also the winningest in NHL history.

The reverse of the 2017 ½ oz Proof Silver Canadian Passion to Play Montreal Canadiens Coin features a group of children playing on an outdoor rink at night in suburban Montreal. A row of houses is visible across the street in the background as a flood light illuminates the rink the children are playing on.

On the obverse of the Passion to Play coins is the image of Queen Elizabeth II. Her Majesty’s effigy is featured in right-profile relief and includes engravings of her name, the nation of issue, and the coin’s year of issue.

All 2017 ½ oz Proof Silver Canadian Passion to Play Montreal Canadiens Coins ship in a maroon clamshell box with a graphic beauty box shipper. The NHL and NHL Shield are registered trademarks of the National Hockey League, and the use of NHL and NHL team marks are protected property of the NHL and its franchises.

We encourage all Silver.com shoppers to reach out to us with questions. Our customer service team is available on the phone at 888-989-7223, online through our website’s live chat feature, and via our email address.